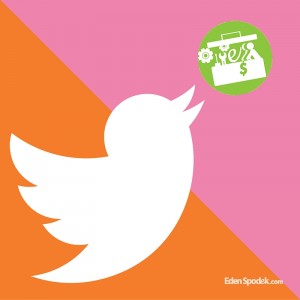 Research shows retailers that use Twitter drive online sales, and have a competitive advantage during the holiday season.

And here’s why…
It’s a typical Saturday morning. I wake up, hop on Twitter and ask, “Good morning! What are you up to this weekend?”

“@EdenSpodek werkin (sic) it the whole weekend! hope you’re doing well!” was the first response. It came from someone I’ve never met in real life. He may not even know I’ve shopped at the store he manages in downtown Toronto. But @ngazman, general manager of the only West Elm store in Canada at the time, started following me and engaging with me on Twitter.
I think I surprised him with this:

“@ngazmen Hi! Maybe I can convince @DavidSpodek to pay you a visit if the end table I want is in stock. ;)”
To be honest, the only plan I had for that Saturday was to write a blog post. But I ended up buying a table I’d considered buying a couple of months earlier, but couldn’t as it hadn’t arrived in the store yet. I forgot all about the table, but when Neil was the first person who popped into my Twitter feed that morning, his warm hello served as a reminder.

Our conversation continued for 21 tweets. He posted a picture of the table to confirm my description and he put it on hold for me. Neil also told me if I arrived while he was on lunch, he’d be in the back and to make sure I said hello.

Affect Me + Affect My Community

Another friend of ours was watching. She doesn’t have a West Elm in her city. She joined in the discussion and asked me to post pics. So, before I looked for Neil, I took a bunch of photos and posted them to Instagram tagging each one “#westelm.” And more discussion ensued.

Neil was just as warm and friendly in person. He had everything waiting for me and made sure to give me a big hug goodbye. Our conversation resumed on Twitter and he asked me to post pics of the table once it was assembled and in my den. Yes, I’ll be back.

If you’re still not convinced, here’s another example of great online relationship building.

DAVIDsTEA, a Canadian retail tea chain making headway in the U.S. was tweeting about its flavor of the day, Ceylon Star. DAVIDsTEA always samples their flavor of the day. So, when I got home from West Elm, I decided to take a walk and stop by my neighbourhood location. Today, @DAVIDsTEA followed up to see if I’d made it into the store yesterday. Sure did. I ended up stocking up with $35 worth of tea and buying a take-out cup of Ceylon Star! In updating this post, I’ve learned they’ve converted their Twitter account to a broadcast channel. What a shame!

Much has been studied about the effect of Twitter and online purchasing decisions.

Forbes’ found that a 81% of those surveyed reported recommendations and posts from family and friends directly impacted their buying decisions. While according to Business 2 Community, “Social media now plays almost as large a role in purchasing decisions as does TV, and 57% of consumers say they’re influenced to think more highly of business after seeing positive comments or praise online.”

Today you can make impulsive purchases with a hashtag and a tweet. And, millennials expect brands to respond to them when they use Twitter as their customer service channel.

I don’t know about you, but I don’t limit my shopping to stores that have a Twitter presence, nor am I 100 per cent convinced all retailers need to be there to handle inquiries and complaints – at least not yet.

But I know I’m not alone when I say I’m more likely to frequent a business that invests time building a relationship with me online. It’s often indicative of their overall customer service practices. Brandwatch recently reported that 77% of Twitter users feel more positive about a brand that replies to their tweets.
What’s your take? Do you believe retailers with an active Twitter presence help drive sales and have a distinct advantage over their competitors who don’t? Do they drive you to their bricks and mortar stores too?
An earlier version of this post was originally published on SpinSucks.com