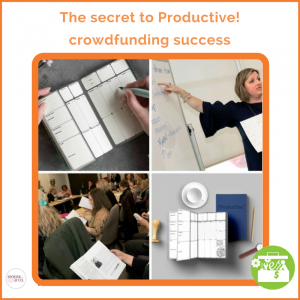 Do you have a fabulous product that will make people’s lives easier but only your clients know about? Do you need to get beyond your tribe and build greater awareness so that you can actually find a broader audience for your product that wants it too? If so, then you’ll be interested in learning how Shelagh Cummins built and ran a successful Kickstarter campaign for Productive!

I first met Shelagh several years ago through the BlissDom Canada community. She’s a business consultant, coach and speaker who helps women entrepreneurs scale a profitable business — without drowning in debt, forfeiting family time, or working in their sleep. I’ve seen her speak at events and she’s helped a lot of women entrepreneurs find their path to success.

What I really love about the Kickstarter campaign for Productive! is what Shelagh decided to do with her stretch goals once the funding goal was met. I recently interviewed Shelagh to learn more about her background and how she built and ran a successfully-funded campaign that helped others in the process.

If you’re thinking about using crowdfunding to fund one of your products or services, there’s a lot that can be learned from Shelagh’s experience.

And when you’re done, be sure to check out my ebook on Amazon, The 7 Essentials to a Successful Crowdfunding Campaign.

Eden: What can you tell us about your product?

Shelagh: Productive! is an all-in-one business tool that walks you step-by-step through a revolutionary system of managing your time to accelerate business growth. It helps you maximize your time and your business growth as you shift your work days from busy to powerful.

Eden: Why did you decide to use crowdfunding instead of other funding options?

Shelagh: I am known for my speaking and private and group coaching programs. I have always been in the service industry and was crossing the line into product sales. I chose crowdfunding as it was a great platform to create awareness and excitement for my new product Productive! – and it allowed my community to be a part of its creation and launch into the market place.

Eden: Why did you choose Kickstarter as your crowdfunding platform?

Shelagh: When I was researching platforms, I had to explain what the other sites were to my audience, but all knew what Kickstarter was. They had heard of the name, had already been a backer, or had heard of people who “had a Kickstarter” campaign. In general, they hadn’t heard about the others – so I went with what my audience was comfortable with.

Eden: Is there anything you wished you’d done differently?

Shelagh: When my Kickstarter launched, I wasn’t expecting the deluge of outreaches from marketing companies that focus on helping campaigns gain visibility. Next time, I will budget working with one to help expand my reach. Just because the Kickstarter seemed to be inundating my world (I felt like it was all I talked about online and in person!!) – it doesn’t mean others have heard of it. I thought I was being very open and sharing incessantly about it – but I can’t believe how many people wanted to be a part of it, but heard about it too late. So having a more effective and strategic marketing plan will be a part of my next campaign.

Eden: What was most important thing you learned as a result of your campaign?

Shelagh: The impact of cause marketing. When I reached my original target, I introduced the concept of “Get One Give One” – where for every Productve! planner ordered, I donate one to an aspiring entrepreneur who needs a leg up. When that initiative launched – the backers took action. For me, giving back is a huge part of what I do so it was very exciting… and for the buyer they felt good knowing someone else will benefit from their purchase. Up until then, most of the backers were friends and families or people investing in my programs as the rewards. The Get One Give One fuelled the true crowdsourcing.

Eden: What percentage of your backers came after the first three days and before the last three days? (This is about the number of pledges, not amount pledged).

Shelagh: When I reached 100% of the campaign, I changed the story to the Get One Give One… by then most of the larger rewards had been fulfilled and I could switch the conversation to the cause marketing piece of giving 10% to Hope International Development agency to fund their micro­credit program – and the Give One where for every planner sold, I donate one.

I don’t have data on the numbers that came in – I didn’t track that. My goal was 100 backers – I fell a bit short but am thrilled with the number of people who are championing the product and see the value.

Eden: What advice do you have for someone who is considering launching a crowdfunding (or Kickstarter) campaign?

Shelagh: The best advice I received and I will pass on, is to be clear where 50% of your funding will come from prior to the launch. This alleviated the pressure. The large rewards were my online and in person programs that were going to sell regardless of the Kickstarter – so I funneled them through the campaign to ensure I hit my minimum.

Eden: Did you know to enter the campaign with at least 30% of your funding guaranteed (or perhaps 50% in your case) and how much of that did you secure in the first day? Two days? Three days?

Shelagh: I launched with no guarantee but a solid plan. I had worked in the lead up to build a large pool of prospects who were waiting to see when enrollment to [my program] “Electrify, Momentum, and Impact” would open. I opened registration to coincide with the Kickstarter and offered the first one or two registrants the discount (I never discount my programs) offered through Kickstarter. So I had done lots of hustling in the lead up and during. Most backers came from conversations I was having behind the scenes – encouraging them to sign up through the Kickstarter, be a part of the launch, and enjoy the savings for the program they were going to be taking.

So there you have it, straight from a founder:
“The best advice I received and I will pass on, is to be clear where 50% of your funding will come from prior to the launch…”
Want to launch a crowdfunding campaign, but no clue where to start? Unsure how to make it a success? Start with my ebook, The 7 Essentials of a Successful Crowdfunding Campaign. It’s practical advice that will set you on the right path.