I left my heart in San Francisco thanks to Virgin America 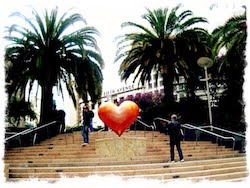 Last June, the internet was a buzz with Toronto folks getting emails from Klout, a San Francisco-based start-up that helps determine a person’s influence on Twitter. I didn’t pay much attention until a few days later when I got an email from Klout inviting me to an exclusive party with Sir Richard Branson because I was one of the “influencers” who might be eligible for a free flight to San Francisco or Los Angeles (my choice) provided I pay airport fees and taxes. Back up, what???

I knew the program was legit. In an effort to promote its new return flights from Toronto to San Francisco and Los Angeles, Virgin America partnered with Klout to offer 500 free flights to Torontonians on Twitter who according Klout were thought to have enough “influence”. I’m not going to get into the merits of Klout nor what they mean by influence – it’s defined in many ways in the social media sphere. Besides, there were other factors at play in addition to a Klout score, when determining which local peeps would qualify for this program. Suffice it to say I linked to the special website and confirmed my eligibility. I wasn’t asked for anything in return but was provided with a hashtag in case I wanted to tweet about my experience or the program.

Why did Virgin America decide on this strategy? There were probably lots of reasons. For one, they wanted to reach out to people who were early adopters and active online. With wi-fi equipped planes and soon-to-be-launched social features like between seat chat, they want to be the airline of choice for the social media and tech savvy crowd.

I know this may sound lame, but I’d never been to California before. I rarely fly anywhere and other than family vacations, my husband and I hadn’t really been away alone since we became parents – more than 15 years ago! So, yes, I felt a bit like a kid in a candy store – Charlie and the Chocolate Factory winning the golden ticket. The catch, I had three days to book a flight before the offer was over and it had to be between June 23-August 23 (it was already June 25).

As luck would have it, two tickets were available the one long weekend the kids would be away, so we booked July 29-August 2. Off to San Francisco we went. I’ll save the details of the trip for another post. Suffice it to say we had a wonderful time and covered a ridiculous amount of the city including an afternoon in Sausilito – a brief ferry ride – in three fun-filled days.

So, you’re probably asking, what’s it like flying Virgin? Well it’s just fine. In Canadian terms, it’s somewhere between WestJet and Air Canada when it comes to service. Virgin America’s branding has lots of personality, just check out this safety video:
From a staffing perspective, it’s trying to be like WestJet but not there yet. Porter is still in a class by itself although I’m not sure I’d fly in a prop plane for a long-haul flight. I’ve only flown to the U.S. once before, New York, 12 years ago and I can’t remember the airline. We’re fortunate here in that we have strong national brands with good track records. Where we lose out is the cost of travel within our own country.

Virgin America’s flights are all on modern-looking airbuses that look like they’ve taken a page out of Apple’s design books for their interiors. The seat backs are made of hard white plastic that reminded me of my MacBook. Black leather seats were generally quite comfortable except I found the arms hard, narrow and less comfortable than their Canadian-based counterparts. Subtle use of red and purple provided an interesting touch to the décor.

You’re probably wondering about the food and drinks, especially for a long flight. Virgin provides the standard non-alcoholic beverages free of charge. They also offer a selection of alcoholic and non-alcoholic specialty drinks for a fee. All other items, from sandwiches to snack-packs, are available too. Unlike other airlines where the flight attendants come around at “meal time”, on Virgin America, you can order your meals and snacks when you’re hungry by touch screen and pay with your credit card.

Caution: we ordered food relatively early and yet they were down to two sandwich choices en route to San Francisco and one choice on the way home. I tried the grilled Japanese eggplant both ways. It was fine but the sun-dried tomatoes were replaced by fresh tomato slices the second time.

On the return flight I ordered two – one for me and another for my husband – but when the flight attendant brought lunch, she only had one sandwich at first. Why? Well, while my husband was waiting in line for the bathroom, he heard her telling her colleague that passengers were still having trouble figuring out how to order food and kept making mistakes by ordering multiple quantities. Guess what, she probably shouldn’t have complained about passengers in public. But, we got the last laugh because she was the one who erred.

The only other complaint I had was the cost of movies, specialty TV shows and wi-fi for passengers not in first class. Just the weekend before, I flew Air Canada. I was able to watch anything I wanted on a two-hour flight for free – and I did. Why was Virgin America expecting me to pay $8 for a movie, especially when the selection wasn’t great? (To be fair, it was pretty much the same selection as our hotel – the choices were lame all around.) I was under the impression Gogo wi-fi would be free or at least it should have been made available for us Twitter folks to try, don’t you think? The Best of the Web had some cool offerings, including the Best of TED and Gary Vee’s Wine Library – yes, they know their customers.

At the end of the day, the flight was pleasant, service was with a smile, planes flew on time and/or arrived early (we took three – two to get to San Francisco and one home) and safe. And compared to other airlines, the landings were incredibly smooth. Just be sure to factor in all the costs of extras when you’re comparing ticket prices.

One suggestion I have to kick up a program like this in the future would be for Virgin America to actually partner with the cities included in the promotion. Los Angeles and San Francisco got a heck of a lot of free publicity from this program. Just check out some of the posts from local friends who were there at the same time as me:
A Real Canadian’s Blog – A San Francisco Experience Day 1 and Day 2
I want – I got LAX Diaries Coming Soon
A World from A to Z’s Blogging from 35,071ft
I’d be curious to learn how many people are considering travel there as a result of the Twitter chatter from Toronto tweeps this summer. (My Flickr pics are coming soon – promise.)

Would I fly Virgin America again? Sure as long as the price was right. In fact, my husband was already thinking of heading to LA and only looked at Virgin America flights – there are weekly deals, even more special offers for Twitter peeps – he’s entitled to dream.