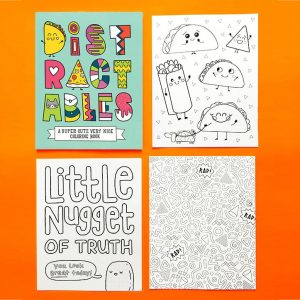 Lora DiFranco is no stranger to crowdfunding. She came on my radar about a year ago when I saw her now successfully-funded Kickstarter campaign for You Got This: A Mantra Coloring Book. I sent her a message during the campaign and was delighted not only at how quickly she replied but how warm and friendly she was. Lora started Free Period Press three years ago because she was looking for an easy way to be creative when she wasn’t working away at her 9-5 job. She felt colouring books were the “perfect solution” and she got some of her artists friends together to create the first one: Free Period: A Patternful Coloring Book for Adults + Kids. Have a look at how she continues to keep the backer community engaged and shares updates of each subsequent campaign!

I caught up with Lora recently while in the midst of her latest campaign. As a former backer/customer, I belonged to her email database and she sent out an email letting everyone know her latest campaign was live with a request for support and a free gift if we helped spread the word through our own social media channels. Yep, those email lists are golden.

Eden Spodek: Tell us about your current Kickstarter Campaign

Lora DiFranco: Our latest coloring book is called Distractables: A Super Cute Very Nice Coloring Book. We noticed that there are a bunch of coloring books that are really intricate, so we wanted to make one that is less serious and more conducive to quicker coloring sessions. It features all of your favorite things that cheer you up after a bad day – cute animals, fun patterns, and delicious food.

Eden: Why did you choose Kickstarter as your crowdfunding platform?

Lora: We’ve had great experiences with Kickstarter in our past campaigns. It’s the most well-known crowdfunding platform and I associate it with higher-quality projects.

Eden: How many Kickstarter campaigns have you run and why?

Lora: This is our fourth Kickstarter campaign. Before we invest a bunch of money in printing a first round of books, we want to make sure there is interest in making the project a reality. Kickstarter is perfect for that – you can promote it to your user base, but also see what the Kickstarter community thinks of it! (Eden’s note: This is a perfect example of using a crowdfunding campaign for idea validation.)

Eden: You’re in the 36% of funders who actually have a campaign successfully funded. Not only that but you’ve been able to replicate your success several times. Has your approach changed between your first campaign and your current one?

Lora: Not really! 🙂 Our approach has always been to make an awesome project, tell the story via Kickstarter, and then promote it like crazy!

Eden: What was most important thing you learned as a result of your campaigns?

Lora: We’ve learned a lot, but I think the most important thing goes back to Seth Godin’s idea of the Purple Cow. Your project needs to be really different from what’s out there. It takes something remarkable for people to take notice.

Eden: What is the status of your funded colouring books now?

Lora: All of our past coloring books are available on our website, Amazon, and dozens of independent bookstores and shops. The marketing of books doesn’t stop with the end of the Kickstarter campaign… getting funded is really just the beginning!

Eden: What advice do you have for someone who is considering launching a Kickstarter (or other crowdfunding) campaign?

Lora: I’d recommend doing a lot of consumer research before you launch your campaign. I try following the Lean Start-Up methodology and recommend that book to everyone looking to create a new product!

Eden: Thanks Lora! Distractables: A Super Cute Very Nice Coloring Book looks awesome. I’m a backer and can’t wait to get mine! The campaign only has four days left. If you’re reading this, consider making a pledge now, before it’s too late!

So there you have it, straight from a successful crowdfunding founder.
“Our approach has always been to make an awesome project, tell the story via Kickstarter, and then promote it like crazy!”

UPDATE: Lora has launched another Kickstarter campaign for Habit Calendar: Track the habits that make you a sane human. Consider supporting her, I did!

Check out my previous interview with Carly Shuler, co-founder, Kindoma.

Want to launch a crowdfunding campaign, but no clue where to start? Unsure how to make it a success?

Let me show you how, step-by-step, in the ULTIMATE CROWDFUNDING MASTERCLASS.

Grab your seat now to my Ultimate Crowdfunding Masterclass Course – there’s still time to register and I’d love to see you there.

Yes, I Want to Join!