This Remembrance Day show your respect 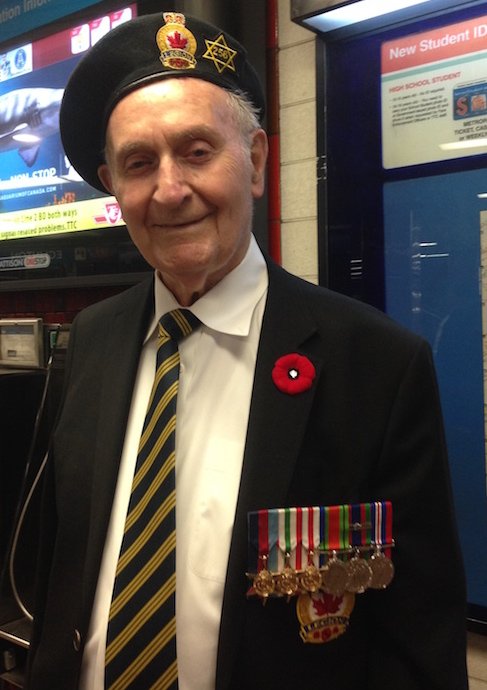 This year Canadians have a heightened awareness of Remembrance Day as honour the memories of Corporal Nathan Cirillo and warrant officer Patrice Vincent. We’re paying our respect those who’ve not only defended our freedom but those who continue to defend our democratic values.

For the past several years there’s been much talk about the WWII veterans who volunteer each year to sell us poppies. Those who are left aren’t getting any younger. Many of them now spend their days in retirement lifestyle communities and hospitals. But what do we really know about any of these brave men and women who gave some much of their lives for us?

A friendly WWII veteran has been selling poppies at a nearby subway station. I’ve seen him every weekday that I’ve passed by. Two poppies I purchased this year were from him. The second time was about a week ago. I thanked him. As I was walking away, it registered that his poppy had a menorah in the centre. I’d never noticed one before.

About 30 seconds later, I stopped in my tracks. I remember my late grandparents’ stories of how they volunteered during the war by helping troops stationed in Halifax. They invited some of the Jewish soldiers for Kosher meals and possibly provided a room and bed for sone of them to stay overnight on days off.

So I decided to go back and get to know this man who served our country. I asked him if he’d been stationed in Halifax. He hadn’t been but he appreciated my asking and we spoke for about five minutes. He told me how he’d been to Cape Breton and how he wanted to go to Halifax one day and trace his genealogy at Pier 21 (Canadian Museum of Immigration). I was concerned it might take too long. I shared how my husband and I visited and traced the ship my father-in-law was on when he arrived in Canada, and let him know the process was very quick. He started telling me where his ancestors were from. We compared notes. I learned the first members of his family to come to Canada settled in Toronto in the 1890s. We talked a bit about his interests and hobbies. I didn’t want to ask him about his role in the war but I could see from his badges and metals he was well decorated.

I thanked him for everything and regret not asking his name. But I did ask him to take his picture to share with you. As you can see, he was happy to oblige and stood proud.

Please take a moment today to try and get to know one of these brave men and women. Lest We Forget.

Related articles across the web