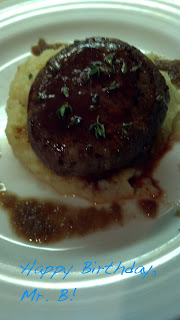 Rarely do I talk about clients in this space. But today is my husband’s birthday and there is always room for exceptions.

For the past three years, I’ve been fortunate to work with the S. Pellegrino® Almost Famous Chef Competition – the Canadian Regionals to be exact. It marries two of my passions, education and food.

This year we created S.Pellegrino presents: Recipes from Almost Famous Chefs, a free eBook of recipes from the 2012 and 2011 Canadian competitors adapted for the home chef.

This morning as I was figuring out what to make the birthday boy for dinner, Mardi sent me her blog post describing Les Petits Chefs’ latest adventure in the kitchen. The light bulb went off. I figured if they could make the dish in an hour, I could attempt to do the same. Beef tenderloin is one of the few cuts of beef I can cook – not kill – without a barbecue.

According to the birthday boy, dinner was delicious although my plating wasn’t quite as pretty.