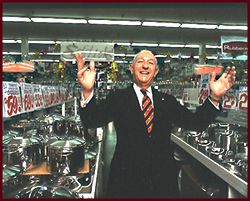 Today was a sad day for bargain shoppers and arts patrons in Toronto: “Honest Ed” Mirvish died at the age of 92. His contribution to this city is unparalleled. He will be missed.

Honest Ed’s has been a landmark at the corner of Bathurst and Bloor since 1948. The department store defined bargain shopping since its inception and has never strayed from its roots.

Several years ago, I had the honour of being his guest at Ed’s Warehouse restaurant on King (it was actually a friend’s family who he had invited for dinner, and  I was asked to join them). We had a wonderful tour of the restaurant by Mr. Mirvish himself and his lovely wife. Despite all the brashness associated with Honest Ed’s, Ed Mirvish was anything but. He was an understated and gracious host who regaled us with lots of interesting stories.

I haven’t ventured into Honest Ed’s since my university days. I think it’s time for another visit.