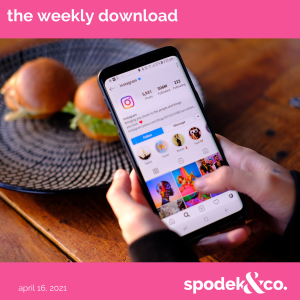 Happy Friday! We’re glad to have you back for another edition of The Weekly Download.

Google says that through its ongoing testing, experimenting and review processes, the company has learned that users “appreciate product reviews with in-depth research rather than thin content that simply summarizes a bunch of products.”

In short, the update will provide enhanced SERP placement for product reviews that include “insightful analysis and original research” written by experts or enthusiasts who know a topic well.

The update will affect English language reviews only for now. Content creators can read the full announcement from Google to learn more about additional useful questions to consider when developing product reviews.

This week Instagram began a new test around hiding Like counts on posts, following tests that first began in 2019. This time, Instagram is not automatically enabling or disabling the feature – instead, users themselves can choose whether or not they want to hide or see likes to determine what works best for them.

According to the company, the test will soon be rolled out on Facebook, too. Only a small percentage of Instagram users will be chosen to participate from around the world.

Payday is just around the corner for over 60K Clubhouse creators.

As promised, the social audio app is testing its first revenue-generating feature for creators. The test will provide a “small test group” of creators with the ability to accept payments from fans and supporters directly through the app.

To send a payment, users can visit a creator’s profile, then tap the button at the bottom that says “Send Money.” Simple, right? Clubhouse says creators will receive the full amount users send.

Oh, and speaking of Clubhouse, a new competitor is reportedly on the horizon.

According to Mashable, Reddit is currently exploring a new feature that would enable moderator-run voice chats. Development is in the early stages, and there’s very few details available to the public as of now.

Keep an eye out for more details on this one – we’ll be sure to share the scoop!

In an effort to address concerns about algorithmic harms, Twitter’s new initiative hopes to create transparency around the company’s machine learning systems, improve the fairness of the algorithms, and provide users with “algorithmic choice” surrounding the technologies that affect them.

Dubbed Responsible ML, Twitter says the company-wide initiative is a working group made up of people from across the company, including technical, research, trust and safety, and product teams.

Twitter’s ML Ethics, Transparency and Account (META) team is heading up the project, and is described as a “dedicated group of engineers, researchers, and data scientists collaborating across the company to assess downstream or current unintentional harms in the algorithms” and to also help Twitter prioritize issues.

Since October 2020, if content was removed from the platforms and a user disagreed with Facebook’s decision to keep it down, that content was eligible for final appeal to the Oversight Board. The latest announcement demonstrates a broadening of the board’s initial scope, as it can now review Facebook’s decision to leave content on the platform, including posts/statuses, photos, videos, comments and shares.

The ability to appeal content to the Oversight Board will roll out to users around the world in waves, but Facebook says all users should be able to submit appeals within the coming weeks.

Wishing you all a weekend as happy as this sweet Golden Retriever just trying to share her musical gifts with the world.