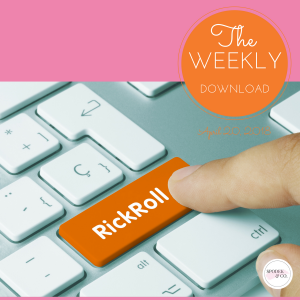 Here’s what we’ve been chatting about in in the digital marketing world this week: #BoycottStarbucks, Instagram’s new transparency initiative, GIFs on LinkedIn, and Snapchat’s new Shoppable AR. And of course, it wouldn’t be a Weekly Download without a little Friday Fun to kick your weekend off right.

Following a cue from parent company Facebook, Instagram will soon allow users to download a copy of all the information they’ve shared, including photos, videos and messages. In light of the Cambridge Analytica scandal, looks like both social media giants are erring on the side of more transparency these days.

The move will help Instagram users to keep track of how much of their data is on the platform. It also helps Facebook comply with the forthcoming European data privacy rule, General Data Protection Regulation (GDPR).

Starbucks to close over 8,000 stores for race sensitivity training

Starbucks will close more than 8,000 stores for one afternoon next month to hold racial bias training. The move was motivated following the arrest of Rashon Nelson and Donte Robinson at a Philadelphia location. The incident has prompted protests and calls to boycott the coffee giant.

According to police, employees called 911 to report the men for trespassing when they asked to use the restroom. They were denied because they had not yet purchased anything. Witnesses say they were simply waiting for a friend to arrive.

On Monday prior to the training announcement, about two dozen demonstrators occupied the Philadelphia shop where the incident took place. Starbucks has also faced a backlash on social media since the arrests with the hashtag #BoycottStarbucks trending on Twitter.

Starbucks CEO Kevin Johnson responded quickly to the public outcry, calling the employees’ actions “reprehensible” and apologized on behalf of the company. He has met with Nelson and Robinson, and the three have begun mediation proceedings.Nelson and Robinson are advocating “lasting changes” for the brand, including a customer bill of rights.

This week LinkedIn announced that GIFs will be available to send and receive on LinkedIn Messenger.
According to GIF platform Tenor (who will be powering the GIF searches within the platform), messages sent on LinkedIn have grown by 60 percent in the last year. Tenor says the use of GIFs will help “to create genuine connections with professional contacts such as coworkers, past colleagues or fellow alumni.”

It’s true, more people are sending messages on LinkedIn. And using GIFs within messaging in general has become much more popular. But is it really necessary to be able to send GIFs to your colleague, recruiter, or potential candidate for a job? Let us know what you think in the comments.

The update is now available for half of LinkedIn’s users and will roll out fully in the near future.

A new update called Shoppable AR allows Snapchat advertisers to sell products directly through sponsored Lenses. Companies can now close the shopping loop and keep users inside the app while making purchases.
With Shoppable AR, advertisers can add a button directly to a Lens. Users can simply tap to visit a website to learn more about the product, or make a purchase. Other options include a link to install an app or a “long form” video like a trailer – all directly inside the app.