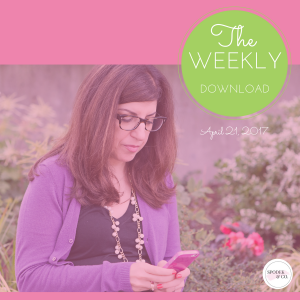 Did you have an awesome long weekend? Seems like weeks ago. How time flies… It’s already Friday and time again for the Weekly Download. Let’s round up some of this week’s most hyped up stories from the digital world, including funny pink and blue drinks, new features from Google and Instagram, chatbot chatter, the decline of consumer trust in bloggers and of course some Friday fun to get your weekend started.

Starbucks’ new flavour-changing sugary specialty drink had the internet buzzing this week.  Tried it? Love it? Hate it? No matter what your tastes are, prepare to see a whole lot more of this brightly-coloured beverage all over your Instagram feed until it vanishes from menus on April 23. Do you think this was stunt to wallpaper the Internet or it’s Starbucks’ way of getting kids hooked on their fancy sugary drinks at an earlier age? I’ve read buzz about both in my feeds and heard my local baristas chatting about how many posts they saw on Instagram yesterday. Either way, Starbucks is laughing all the way to the bank. Gulp!

Well we are certainly having a magical day! 🦄 #unicornfrappuccino

And then A&W took a shot at Starbucks. Oh my!

If you’ve been searching for new blogs to peruse lately, you might have come across Google’s new carousel and rich list results. But besides visually enhancing the results page, how does the update affect digital marketers? The feature presents new branding opportunities for companies looking to grab attention on Google’s coveted page one. How will you use the new update to your advantage?

When it Comes to Consumer Products, Where do Canadians Put Their Trust?

I’ve long been an advocate of disclosure in social media (and other channels) for anyone who has a material relationship with a brand they’re mentioning. Lack of disclosure drives suspicion and erodes trust. You may know that such disclosure is mandated by law in the United States and governed by the FTC. But did you know last year Advertising Standards Canada began cracking down on bloggers who didn’t disclose such relationships? The results of a recent survey conducted by Environics asking people to rate their trust in information sources including products and services, found product sampling was most effective while online ads and bloggers were the least. In fact, the credibility of bloggers dropped the most! This isn’t to say bloggers, other influencers and online ads don’t have an important role in the marketing mix but rather they need to be handled strategically and according to best practices.

To Chatbot or Not?

In a tech-driven world, Chatbots (or bots) can lend a helping hand. Need to know the weather in Vancouver next week? Siri has you covered. Craving pizza for dinner? Alexa can help you there. Some companies are even using AI-powered bots to learn more about their audience. So what’s your stance on chatbots? That’s what a new survey on chatbot awareness from Martin Waxman, my friend and colleague, is asking.

It’s no secret Instagram (and Facebook to a lesser extent) has been adding new Snapchat -inspired features. Have you seen Instagram’s collections feature? Although it may not have an application for brands other than inspiration and market research, it appears to be closely modelled after Pinterest. No app is immune from Instagram’s wrath. 🙂

A Tribute To Carrie Fisher

This week we said goodbye to HBO’s Girls. After six seasons, we closed the page on Hannah Horvath’s struggles and triumphs as a postgraduate in New York City. If you’re going to miss your weekly dose of Lena Dunham’s wit and no-holds-barred attitude, fear not: her Women of the Hour podcast is ready for streaming.