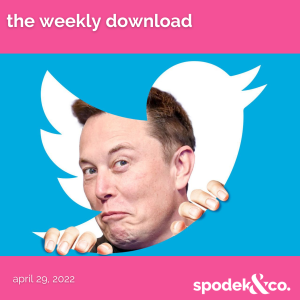 How is it the last Friday in April? This year is flying by, and so much has been changing in the online space. In this edition of the Weekly Download we are discussing Elon Musk and his new position with Twitter, YouTube Shorts hitting 30 billion daily views, and LinkedIn’s record-level engagement.

We don’t have all the answers yet, but we definitely have questions. Elon Musk is set to acquire Twitter for $44 billion. Musk has shared that he wishes to ensure that the platform serves as a place that welcomes freedom of speech.

In a joint statement with Twitter, Musk said he wants to introduce new features and get rid of automated “spam” accounts, in addition to making Twitter’s algorithms open-source. “Twitter has tremendous potential,” he said. “I look forward to working with the company and the community of users to unlock it.”

Many users are nervous that Twitter will become a place for disinformation, hate speech, and bullying with Musk’s promises to relax content moderation. Notable journalists and analysts have shared that they think Musk’s ownership could alienate advertisers.

This won’t be the last time we discuss this topic, assuming Twitter’s change of ownership will be approved by shareholders, The deal is expected to close later this year and we’ll be watching closely as answers and changes emerge. In the meantime, we’re not suggesting clients change their social media strategies anytime soon.

After sharing in February that its Shorts had 5 trillion all-time views, YouTube says Shorts are now averaging 30 billion views per day. This statistic confirms the popularity and success of short-form content, and makes it easy to understand why every platform is focusing on it.

The obvious next step for YouTube Shorts is ads and monetization. The question is, how? With such a short clip, you cannot insert a mid- or pre-roll, as it would take away from the nature of the content. Vine faced this issue and ultimately did not survive it. It would come as no surprise if YouTube follows in the steps of TikTok and creates an earnings program for creators based on engagement.

Let’s wait and see if YouTube can build a sustainable ad process.

Microsoft recently released statistics showing that LinkedIn has seen a massive rise in revenue and record levels of engagement, reflecting just how much the working world has changed due to the COVID-19 pandemic.

In the last quarter, LinkedIn’s revenue rose by 34% and active sessions on the platform rose by 22%. What will be interesting to see is the type of users that spend the most time on the platform — this information has yet to be released.

Since the beginning of Q1, LinkedIn has released several new features, which we have explored in previous Weekly Downloads. It is safe to say that LinkedIn will continue to be a leader in the job opportunity and networking space. We’re looking forward to seeing what is next!

the rainbow formed by the water that the whale humped. pic.twitter.com/iSzfCBxeHx

Enjoy your weekend, and we’ll see you next week.