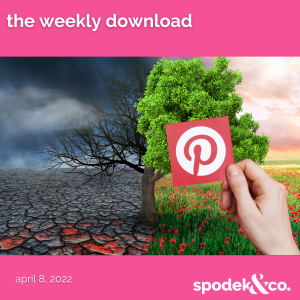 Good things are happening in the online world. Here’s the Weekly Download.

Pinterest is the first major digital platform to add clear and defined guidelines prohibiting climate misinformation for content and advertising.

Which network will be next? Let’s hope more jump on board.

Snapchat has introduced a new Lens that teaches Snap users to fingerspell in American Sign Language (ASL), via various games and exercises within the app. Snapchat has partnered with SignAll to offer this first-of-its-kind experience to users.

The new Lens was built using Snap’s evolving hand-tracking technology, which provides more capacity for communication. Snapchat has used this technology previously, to launch similar Lenses as part of last year’s International Week of the Deaf.

This is a great experiment that will help more people become aware of sign language and even learn the basics.

As chat and messaging become more prominent on the app, Instagram is introducing more features to enhance the experiment.

One new feature is a “reply while you browse” option, which will enable users to reply to a message in-stream. Instagram is also adding a quick-send option, which will display your top friends when you tap and hold the “share” button on any post. Lastly, the platform is adding a feature that shows who is online right in your main DM panel.

Within the last week, Elon Musk has become the largest shareholder of Twitter. Shortly after the news became public, Musk shared a poll on Twitter asking users if they wanted an edit button. Twitter has since shared, “we’ve been working on an edit feature since last year! no, we didn’t get the idea from a poll.”

For many Twitter users, this news is long-awaited, and it will be a big day in the online world when this is launched.

What we all experienced on April 1:

See you next week!