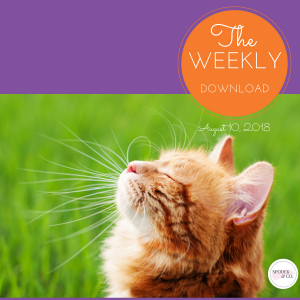 We’ve got that Friday Feeling! And as per usual, our Weekly Download will break down some of what you need to know in the digital world this week.

Today, we talk Facebook’s venture into augmented reality, Pinterest’s new video ad format, Snapchat’s speech recognition lenses and a drop in user numbers, and how one social giant’s “stories” have changed social media over the past two years. Let’s get started.

We know that Facebook has been developing augmented reality  ad content, but it came as a surprise when they recently announced the release of their AR gaming features. The newest Messenger update now allows up to six friends to take their group chat videos to the next level.

As reported by TechCrunch, “…there will be no ads, sponsored branding or in-app purchases in Messenger’s video chat games.” However, they make the important observation that AR games offer opportunities for plenty of revenue. Don’t expect this ad free environment to last long.

Messenger AR games closely resemble those initially created by Snapchat, which have been available to users for many months. Although the game content itself is unique to Facebook, Snapchat wins when it comes to overall aesthetic and virtual complexity.

Starting today, you can play AR games with your friends directly in @messenger video chat. Game on! 🎮 pic.twitter.com/CAp1d04kKf

After testing the waters over the past couple of months, Pinterest has introduced ‘max. width’ video ads. Designed to maximize Pinner awareness, max. width video ads make target audiences accessible. “In this case, bigger does mean better: we’ve seen increased engagement rates for this format as Pinners take notice of this high-impact video.”

Distinguished brands like Visa, Warner Bros and Lowes have provided testimonials on Pinterest’s business site speaking to their successes. And Pinners seem to be loving it! According to Pinterest, 61% of users enjoy seeing content from brands and are 2.6 times more likely to purchase than with regular image ads. Those are some good numbers.

Advertisements can run from four to 30 seconds, but Pinterest claims the most successful video ads are six to 20 seconds long. Other recommendations include strong branding in the first few seconds and simple messaging. And if your ad includes some instructional info? You’re much more likely to have longer watch times. What’s the best part? You can promote your pin, on-the-go, in as little as nine seconds!

Snapchat recently released lenses that use speech recognition for activation. Introduced to the Lens carousel like all other filters and features, these new Lenses will use audible keywords instead of facial recognition to prompt a response.

By using words like “hi”, “love”, “yes”, “no” and “wow”, you’ll notice that both visual and audio effects will be activated. Having a Lens triggered by specific English words is unique to Snapchat. Surely other social platforms will be quick to follow.

If you can’t find them in your carousel, be patient! It may be a few more days before it fully rolls out.

Snapchat has released a new lense that is voice activated. The filters are designed to recognize certain pre-selected words, like “love” or “yes”. https://t.co/kexVNQSpwB

Speaking of Snapchat, their latest financial results were released this week, and provide some interesting business and advertising highlights.

Approximately six months ago, Snapchat disrupted their app with a redesign that resulted in some user losses. According to Digital Trends, the redesign was responsible for the loss of three million active users.  Snapchat explains away these losses as “normal churn,”and in fact Snapchat’s user numbers are ahead by eight percent from the 173 million daily users reported last summer. They also saw a 15 percent increase in views which was record-breaking for the company, and their revenue increased by 44 percent compared to this time last year.
Fear not, folks, Snapchat is doing just fine. The company has a reputation for innovation and creativity that Snapchatters love, overall. And their many copycat competitors are proof that Snapchat is here to stay!

Instagram’s Stories turns two this month. Since launching in August, 2016, the community has grown hand over fist, with more than 400 million users active on Instagram Stories as of June 2018.

From Boomerang, Type Mode, Filters and Polls to Emoji slides, Story music and the Questions Sticker, it’s no wonder this popular feature has been such a hit with both users and businesses.

Now, before we move on to some laughs, we wanted to alert you to a rolling Facebook update for service business, one that will change the layout of your Facebook business page. Keep your eye on your notifications, as Facebook is letting people know about this in fits and starts. We only recently got our notice, and our template rollover is happening closer to the end of the month.

According to Facebook, the updates are the result of people and businesses wanting easier ways to connect. Good news for small business owners. The new templates will highlight hours, prices, recommendations, and more, in the hope of driving better engagement with consumers. 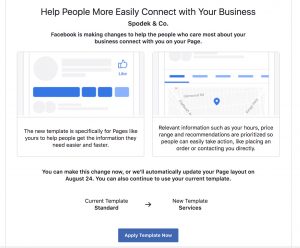 There’s no better way to end the week than a good laugh. What’s funnier than a baby’s laughter, children’s honesty and cat’s being their mischievous selves? Nothing!