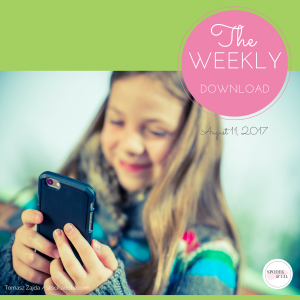 This week we’re chatting about how the Internet is helping reunite a little girl and her best friend, Instagram’s live broadcast update – seems there’s a new update from them every week, Alexandra Samuel’s take on smartphones and kids, a serious signage mishap at Walmart, the meme-ification of politics and some Friday Fun!

Cue all the feels!

Phoebe, a six year old from the UK, was on vacation in Toronto last week when she lost her beloved stuffed animal, Sleepy Dog. While killing time at the Eaton Centre before their flight home, Phoebe noticed the stuffed pink dog had gone missing. With no luck in their search and a flight to catch, Phoebe’s mom shared a post on Facebook imploring the public to keep an eye out for her daughter’s best friend.

The post has been shared more than 17,000 times and is also making the rounds on Twitter thanks to several concerned users. We love a heartwarming social media story! Here’s hoping Phoebe and Sleepy Dog are reunited soon.

Instagram’s newest update allows users to start a live video and then invite someone else to join in on-camera.

The live video appears in a split-screen mode, with the original creator of the video on top and the guest on the bottom. The user can invite any current viewer to join the broadcast by tapping an icon on the bottom right. Viewers can interact with your broadcast videos and send hearts and comments.
The update is currently in testing with a small percentage of users and will roll out globally over the coming months.

The new feature sets Instagram apart from apps like FaceTime or Snapchat – it’s not about one-to-one private video chat, rather, the live video is available for all your followers to see in real time. Instagram has positioned the update as a way for millennials to hang, but we’re sure it will be a new popular way to connect for influencers and brands, too.

In an article recently published in The Atlantic, Jean Twenge warns that “There is compelling evidence that the devices we’ve placed in young people’s hands are having profound effects on their lives — and making them seriously unhappy.”

But just how unhappy are they, really?

A new article written by Alexandra Samuel takes a deeper dive into the habits and happiness of today’s teens to see whether or not Twenge’s argument holds water. What she found actually shows that teens of today are no less happy than teens from twenty years ago.

Based on these findings and her own experience both as a mother and tech writer and researcher, Samuel urges parents to stop paying attention to alarmist attacks on kids’ screen time, and instead simply pay attention to our kids. Parents and guardians should try to embrace the role of digital mentor by actively encouraging kids to use technology with ongoing support and guidance in how to use it appropriately.

Check out the article in full — trust us, it’s worth the read!

If nothing else, the current U.S. administration has certainly been a meme-worthy one.

The growing popularity of these bite-sized messages has many wondering if memes will go hand-in-hand with the politics of the future. According to the New York Times, the growing “meme-ification” of politics is partly due to the increasing number of donors who fund such content.

While memes alone did not decide the 2016 election, it would certainly be interesting to see just how influential they were. More interesting still is how platforms like Twitter and Facebook will evolve as the battleground for political commentary in the age of the meme.

Walmart has issued an apology after a photo of back-to-school campaign signage placed over a glass firearms display quickly spread across social media. The sign in question read “own the school year like a hero.”

Several Twitter users spoke out to convey their outrage and ask who thought this poor placement was a good idea. A number of messages made the connection between the signage, guns and school shootings.

While it’s not clear whether it was an employee or shopper who placed the sign there, Walmart is looking into how it could have happened.

Carpool Karaoke: The Series – Will Smith and James Corden

Why was there a giant inflatable chicken near the White House?

A giant inflatable chicken appeared outside the White House on Wednesday morning bearing a strange similarity to President Trump.

The 30 foot bird was a erected by Taran Singh Brar, an artist and documentary filmmaker. Brar told USA Today that he wanted to make a statement about the president being a “weak and ineffective leader.”
He added, “He’s too afraid to release his tax returns, too afraid to stand up to Vladimir Putin, and playing chicken with North Korea.”

It’s not the first time someone has made a statement with a likeness of President Trump — anyone remember this interesting sculpture? (We wish we could forget!)