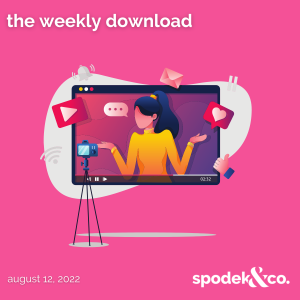 Happy Friday! It’s late summer when the days are warm and hazy and all we want to do is hang out in the park or on a patio. So read this accompanied with a cold drink of your choice.

This week, TikTok gives users deeper insight into the data used to send them targeted ads; Facebook continues to slide in popularity with the youths; Google Meets lets you group watch or listen to YouTube and Spotify and finally, Facebook promises to roll out end-to-end encryption.

We already know that data is super-valuable for social media apps because they can slice it, dice it and monetize it. Now TikTok is giving users more insight into how their personal data influences ad targeting in the copy.

An ‘About this Ad’ info panel will outline the targeting elements. This will bring TikTok in line with other social media apps. Facebook (part of Meta), had been doing this for several years.

That’s not the only ad-related update from the platform.  It has also updated its ad data usage overview. Users can now choose whether they want ads to be based on estimates of their gender or interests.

New Report on Teen Social Media Use Underlines the Rise of TikTok, and the Fall of Facebook

We already knew this so consider this confirmation, when it comes to where teens and younger people hang out, it’s not Facebook or the general Meta environment which includes Instagram. It’s all about TikTok.

Data from Pew Research found that 67% of surveyed teens say they use TikTok and 16% say they use the platform nearly constantly. It also found that the share of teens who use Facebook now compared to eight years ago, fell sharply by 32% compared to 71% in 2014-2015.

Knowing this, we won’t be surprised Meta continues to iterate so it more closely resembles TikTok. Watch this space.

If you’ve joined your company’s Friday game sessions and played Kahoot! Heads Up!, or Uno!, then you know the value of multiple people being able to access multiple apps in one space.

Google announced that it’s adding a live-sharing feature to Meet which will make it easier for people to engage with content together IRL.

This new feature will let people watch Youtube or listen to Spotify together. It will be available under a new ‘Activities’ tab, so go ahead and host a Friday afternoon game get-together or a dance party. Why not?

It was present on WhatsApp before Facebook bought it but now Facebook has updated its plans to turn on end-to-end encryption by default in its Messenger chat platform.

It is testing the process with some chats. Right now, end-to-end encryption can be turned on on a per-chat basis but let’s be honest, not a lot of us are thinking of that when we chat with friends and family.

Having the default setting means all chats will be private, seen only by the participants, not Facebook.

This is good for personal security and privacy. However, law enforcement says it will make it harder to fight crime.

This announcement comes at a time when Facebook complied with a warrant and released information including a private chat that led to criminal charges for a 17-year-old and her mother for performing an illegal abortion.

For this week’s Friday Fun, we have The Tonight Show’s Classroom Instruments with Madonna.