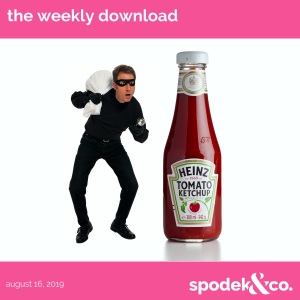 Plus, we’re wrapping it up with Friday Fun — we’ve got a deepfake video for you that’ll leave you laughing (or possibly scratching your head).

This next story is sure to hit you right in the feels.

Earlier this week, a bottle of ketchup was swiped from Perkins Restaurant & Bakery in New Jersey. The thief, a young girl wracked with guilt, purchased two 32 oz. bottles of ketchup from a local Walmart and dropped them off behind the building after hours with a note, which along with a heartfelt apology, included this:

“A few hours [after] I did it, someone crashed into my car, and since then karma, luck, and life have been sh** … I hope returning two new bottles will restore some for me, and I can stop carrying around this guilt.”

The restaurant manager took a picture of the note and shared the story on her town’s public Facebook page and it has since gone viral, even capturing the attention of Heinz Ketchup.

Reformed Ketchup Thief,
We get it, Heinz makes you do crazy things. In honor of your good Ketchup Karma, we’d love to help you with your car damages. DM us. We’ll keep your identity top secret.

In a cool brand move, Heinz playfully responded on Twitter offering to help pay for damages associated with the car accident. She reached out privately, and apparently karma has been restored. Well done, Heinz.

Automattic Inc. will buy Tumblr and take on about 200 staffers, the companies said. Tumblr, a free service that hosts millions of blogs where users can upload photos, music and art, has been overshadowed by competitors like Facebook and Reddit in recent years.

It’s been reported that the Automattic Inc. paid $3 million in the acquisition, a stunning drop in value from the $1.1 billion that Yahoo paid for Tumblr in 2013.

Verizon became Tumblr’s owner through the carrier’s 2017 acquisition of Yahoo as part of a bid to build a digital media and advertising business. The wireless carrier began seeking a buyer for Tumblr earlier this year, The Wall Street Journal reported.

Twitter is now allowing users to follow interests, letting them see tweets about topics of their choice inside their timelines. The features, currently in test mode on Android only, will allow users to see the latest on their favourite subjects, whether sports teams, celebs, or TV, with a selection of tweets about them inserted alongside tweets in the home feed.

The topics, curated by Twitter, will feature individual tweets selected through machine learning rather than editorial curation. For now, during the test phase, only sports-related interests can be followed.

The test is Twitter’s latest effort to help users find the best content on the platform, even if they don’t know what accounts they should follow. Twitter realizes that for newcomers, getting started on the platform can be a little daunting. The company previously introduced Twitter Moments to help users easily follow along with big events like the Oscars or sports games.

Tesla Model 3 Owner Gets Her Key Implanted in Her Arm

Amie DD, a software engineer in Texas, spent almost a year working to have her Tesla’s valet key card implanted in her arm. She documented the entire process on her YouTube channel and blog, and it reportedly went off without a hitch.

There were lots of steps involved, including removing her key card’s antenna, encasing the wire in polymer, and enlisting the help of a piercing shop to have the device installed in her arm.

Though she hasn’t posted any footage yet, Amie says she will be able to unlock her car with just a wave of her hand.

Why didn’t I post a video of the chip working with my car the day I got it? 1. I was at @defcon this weekend! 2. My arm was swollen right after(none of my other chip implants read the first few days). I may have upgrades but unfortunately my body still heals at a human rate lol! pic.twitter.com/WKHogGKqmE

Tell us what you think — would you use an implantable device for convenience sake?

A sixteen year-old has gone viral after sharing a public library receipt detailing just how much money he’s saved by using their services over the years — a whopping $7,078 USD.

Keegan Adreon posted a picture of the receipt on Reddit, writing “just noticed that my library keeps track of how much you save by not buying books and borrowing instead.”

Adreon says with six family members, weekly visits to the library certainly add up. Does your library share how much you’ve saved by using their services?

Teen Hilariously Tweets From Her Fridge… But is it All a Hoax?

And in other viral news this week, it turns out that a story about a teen who made headlines for tweeting from her fridge might have been a hoax afterall.

Twitter user @thankunext327, an alleged teen girl named Dorothy, went viral this week for a series of tweets. On August 8, Dorothy claimed that her mom had confiscated her phone, posting a “goodbye” message to followers from a Nintendo 3DS.

Over the next few days, Dorothy tweeted several more times and claimed she discovered access to Twitter through several other devices, including her Nintendo Wii.

Each time Dorothy would find a new device to tweet from, her mother supposedly foiled her plans. Finally, she got desperate enough to try tweeting from her “LG Smart Refrigerator.”

Twitter and LG even showed their support, tweeting with the hashtag #FreeDorothy.

Although her tweets show what devices they were posted from, it turns out that it’s surprisingly easy to pretend to tweet from basically anywhere by creating your own Twitter source.

LG since confirmed that none of its smart refrigerators have a Twitter app installed. There is a web browser on some models, from which a user could hypothetically tweet — but since you’re using a web browser, any tweets would state you posted from the web. The lesson here? Don’t believe everything you see on the internet. 😉

It was fun while it lasted, Dorothy!

This Creepy Deepfake Video is a Real Mind Bender

A deepfake video (created by YouTuber Ctrl Shift Face) of SNL alum Bill Hader transforming into Tom Cruise and Seth Rogen while impersonating the two actors is making the rounds online this week.

While hilarious, the video also sparks concern about just how insanely realistic deepfake videos can be. The creator of the video agrees that while the general public understands images can be photoshopped, many don’t realize that similar tweaks can also be made to video.