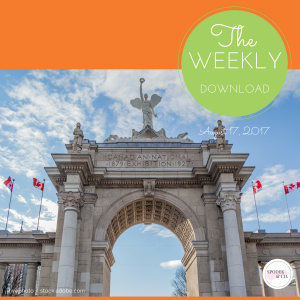 Happy Friday! Before you turn on your ‘out of office’ for the weekend, check out some of the top stories from this past week.

1.2 million Canadian children and youth are affected by mental illness – yet less than one quarter of them are getting help.

Enter Zach, a 12 year-old from the Barrie area, who believes that kids need to feel safe.
Concerned by a lack of support for mental illness and its tragic consequences, Zach has created a fundraising effort called Zach Makes Tracks. The initiative will help Zach raise money for the Royal Victoria Hospital Youth Mental Health Program as he runs from Barrie to Ottawa.

Learn how you can support Zach as he makes tracks to raise awareness and funds for youth mental health by visiting his website.

Four warning signs that you might not be CASL compliant

In June, the federal government pumped on the brakes on Canada’s Anti-Spam Legislation (CASL), originally scheduled to come into force on July 1, 2017. Although many businesses breathed a sigh of relief, the delay has resulted in lax attitudes when it comes to adopting CASL best practices.

Can you check any of these boxes? If so, it’s a sign you may not be CASL compliant.

Google announced Wednesday that its Google Home smart speaker can now make voice calls.
Google Home users will be able to place calls over Wi-Fi free of charge just by saying “Hey Google.”
For now, the feature is only available in the US and Canada. For now, the person on the other end of your call will see “Unknown” or “No caller ID,” but Google says that will be fixed by the end of the year.

After the racist, hatred-fuelled violence in Charlottesville this past weekend, Barack Obama’s response on Twitter has become the most-liked tweet in the platform’s history.

The tweet included a picture of the former president smiling up at a diverse group of young children with a poignant caption taken from Nelson Mandela’s 1994 autobiography, “Long Walk to Freedom.”

The former president’s emotional response comes in stark contrast to that of President Trump’s, who condemned the violence on “many sides.”

We knew we loved her for a reason!

Taylor Swift sent thank-you flowers to a Denver, Colorado company that displayed Post-It note words of love and encouragement during her days in trial earlier this month.

“Fearless” and “People throw rocks at things that shine” were two of the messages creatively displayed by the Craftsy team to demonstrate their support and positivity – they also happen to be Swift song lyrics.
Craftsy took to Twitter to thank Swift for the beautiful blooms and her generosity.

They’re serving what at the CNE this year?!

We hate to admit it, but the arrival of the CNE means the end of summer is near.

Today marks the opening day of the CNE’s 2017 season and like always, the list of sweet and savoury items being featured this year has everyone talking.

A burger with a bright red bun to celebrate Canada’s 150th, a literal sugar mountain and deep fried chicken legs are all on this year’s menu. What will you be trying at The Ex?

We could spend the entire episode talking about that Google document because it’s repercussions just keep spilling out. But we also have to talk about the Marvel editor who was getting trolled for basically being a female writer for Marvel. Fortunately, she got lots of support for her online, even from competitors like DC Comics.

And Dr. Karin Lachmi has a radical proposal to fix inequity between men and women in STEM fields, while getting a seat at the table continues to be a fight. We’ll talk about that too.

If you didn’t follow the Twitter fashion battle between one sexist bro and the gentleman who shut him down, we are happy to tell you all about it. And a Toronto woman is battling the people who stole her identity by contacting other women whom she observes suffering the same fate.

And Bob LeDrew pointed us at an article about men using science to prove their superiority… Let us talk you through it.

We’ve got mixed feelings on this one… But will probably see it on the weekend regardless!