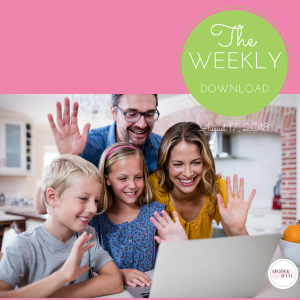 Hello, Friday! We’ve got another installment of the Weekly Download for you. Here’s what we’ve been chatting about in the digital media world this week: Google’s targeted billboard ads, group FaceTime calls, #OOTD returns, Instagram’s Direct Polls and pop-up playgrounds, plus a dash of Friday Fun.

I think we can agree that online advertising can be a pain. It sometimes feels like we’re literally being eavesdropped on, with highly targeted, online ads appearing that are alarmingly specific to brief conversations or queries. Well, get ready for the next level of targeting. Because your web browsing history is set to track you to the streets.

According to Bloombergquint.com, Google’s Alphabet Inc. “…is in talks in Germany about pushing into out-of-home advertising – billboards in stations, shopping centers and shop windows – according to WirtschaftsWoche. The move would be a precursor to similar expansion in the U.S. and the U.K.”

What they won’t be doing, due to privacy concerns, is targeting individuals. Rather, they will use Google’s immense amount of user data to determine what types of people are on the streets at a given time or day. Sports fans on the way to an event might see ads for beer on billboards. Businessmen heading to the office in the morning? Ads for luxury items, or high end cars.

With digital outdoor ad spending growing year over year, and free outdoor WiFi becoming more common, it’s no surprise that advancements such as these are being explored. Keep your eyes peeled, as this is bound to hit North America sooner rather than later.

Google’s Targeted Ads Are Coming to a Billboard Near You. What will programmatic billboard ad technology look like? https://t.co/fWZK9ze9sZ by @atbwebb for @BloombergQuint pic.twitter.com/v2R0Q3vPFh

I always tell my kids, “Don’t make promises you can’t keep!” Well, turns out Apple is reneging on a promise many users were super excited about! Group FaceTime calls are going to have to wait.

After announcing in June that group FaceTime calling would be available with their release of iOS 12, the company recently extended that date to “later this fall.”

Per Apple’s official release notes: “Group FaceTime has been removed from the initial release of iOS 12 and will ship in a future software update later this fall.”

Those of you who have been anticipating these updates might have the sads, but you can still use old standbys like Skype, Google Hangouts, even Slack for your party calls while you wait!

Another thing I tell my kids is patience is a virtue. So, a few extra months, to allow Apple to get this important FaceTime update right before they launch, doesn’t seem too long. That said, FaceTime is hugely popular, and users have been clamouring for this change for awhile now. I hope Apple manages to deliver, and stick to this new timeline.

Instagram is a powerful platform for people looking to show off their “perfect lives” (hint, it’s often a facade!). Rich kids abound, and aspirations grow with every click. But what if you’re not one of the blessed wealthy set? To what lengths would you go to, to manufacture your own showy life? Enter popular Instagram hashtag #OOTD (outfit of the day).

#OOTD is pretty straightforward: Show off your on-trend, high-priced outfits. Daily. And no repeats! And it’s created the latest trend in shopping: buy an outfit, wear it for #OOTD Instagram snaps, and then return it. Yes. Return it. Kinda smart, I guess, for those without flash cars and an Amex Black card.

Who’s engaging in this social media fakery? Believe it or not, individuals aged 35-44, mostly men, were more likely to return the clothes after having worn them to snap that perfect picture.

We truly do live in a disposable world.

Another way to interact with friends, on a smaller scale, Instagram announces their private polls. The process is the same as the original, but instead of applying it to your story, you have the option to send it to one person, or multiple friends in groups. Private polls serve as an outlet for individuals to create more intimate connections within the app.

Starting today, you can send a poll privately in Direct. Update your app to choose who you want to poll – whether it’s everyone in a big group thread or just your very best friend. Update your app now to try it! pic.twitter.com/Lfr6pwPDzI

From buy and return clothing, to “let us create your perfect, Instagram-worthy backdrop!” There’s a new kind of playground in town and you won’t find any sand boxes or slides in these ones. Well, you might. ‘Instagram Playgrounds’ are becoming increasingly popular in major cities. Described as interactive pop-up exhibits, their purpose is to encourage Instagram’ers to get creative while capturing their next exclusive shot.

Attending one of these pop-up exhibits can cost upwards of $40.00 but the high volume of attendees proves the cover charge is worth it for that epic Instagram pic. And unlike traditional art galleries with red-velvet rope parameters, these pop-up exhibits are meant to be played in and explored in a more tactile manner than usual, thus ‘playgrounds’. Check it out.

Did the LA thing and went to #wearehappyplace

Let’s play a game of Where’s Will? 🕵️‍♂️ You may have seen in my stories how I had a preview of @colorfactoryco in NYC yesterday. 🌈 I didn’t know how badly I needed that hour to just let loose like a complete kid until I stepped inside! 🤣 Swipe right 👉 to take a swim with me in their amazing ball pit! 🏊‍♂️ Congrats to @jordanferney & her team on this unique & fascinating exhibit that celebrates artists and COLOR! 🎨 And thanks to B @brooklit for another NYC adventure on the books! 👯‍♂️ #MakeYouSmileStyle

I love books. And while I have a few favourite authors, I’ve never considered being an author myself. But the Toronto Public Library might make me change my mind! They’ve launched a super-fun online contest where you can try your hand at being an author.

It’s a masterful way of using social media to engage their community, and drive high engagement on Twitter. The hashtag is #TorontoWritesABook, and if you would like to submit a few lines, head on over to @TorontoPublicLibrary and check out the rules and regs. And let me know if your contributions makes the cut!

Toronto is writing a book and you can be an author! Tell us how you think the story should progress using #TorontoWritesABook. Each day we select 2 finalists to compete in a poll. The winning line officially continues the story, which you can follow here: https://t.co/BW1GLENnHd pic.twitter.com/HiEUGwf7ZX

And for some hilarious entertainment, check out Jimmy Fallon’s Drinko Game with Ryan Reynolds! _ YUCK!