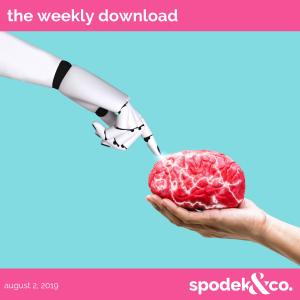 Here’s what you might have missed this week: Capital One’s massive data breach, YouTubers fight back against demonetization, PM Justin Trudeau makes Pride history and Facebook wants to read your mind.

Plus, did you think your conversations with Siri were just between the two of you? Learn who else might be listening in.

As always, we’re wrapping things up with some Friday Fun and trust us, you don’t want to miss out on our team’s selections this week!

Sadly, this kind of headline is becoming all too common.

This week Capital One revealed a massive data breach in which 100 million people in the U.S. and 6 million in Canada were affected. A hacker accessed sensitive information from credit card applications as well as the bank’s existing customers.

After an arrest by the FBI, Capital One says it’s unlikely the information accessed was used for fraud, but will continue to investigate. The company is offering free credit monitoring services to those affected.

The YouTubers Union, a community-based movement that fights for the rights of YouTube users and creators, has teamed up with Europe’s largest trade union in a new campaign known as FairTube.

The union is demanding that Google bring back the “old YouTube” after platform changes have affected how independent creators can profit from the app.

The FairTube movement calls for more transparency when it comes to procedures and processes used to promote or hide a video, and asks YouTube to provide clear explanations as to why a video has been demonetized.

The Canadian Prime Minister walks into a bar during happy hour…

But no, really — what started out as a quick drink became a history-making moment when Justin Trudeau kicked off Vancouver Pride Week at the Fountainhead Pub earlier this week.

This is the first time a sitting Canadian PM has visited a gay bar, and may even be the first instance the leader of a country has done this. @NEWS1130 pic.twitter.com/Vt5o1g6pum

Not surprisingly, a number of patrons took to social media to share their excitement and appreciation for Trudeau’s visit:

Whatever makes ur Pride. 🌈 Why Pride is important to men. Pride and ego is often seen as a negative; but in the right place and in the right amount, pride is actually a good thing. Pride is what makes a man work hard and carefully choose who he keeps as close friends because he doesn’t want to be associated with failure or evil. Pride is what will make a man confidently step up and be a leader because one cannot be conquered by fear and be considered to lead. Pride is what will make a man responsible when given a task. Give him a job and he will execute it with excellence. #pride #ffmf #justintrudeau @justinjptrudeau

File this under “Super Creepy” — Facebook is reportedly helping fund a device to read your brain.

As shared in a scientific research paper from the University of California, researchers have been developing “speech decoders” able to determine what people are trying to say by analyzing their brain signals. In 2017, the social media giant announced it wanted to create a headband that would let people type at a speed of 100 words per minute, just by thinking.

While it could be an amazing innovation, especially for those who lack the ability to speak or type, it also raises some ethical questions about how brain data is collected, used and stored.

Are we truly ready for the consequences of wearable brain-control devices? Especially in the hands of big tech? Let us know your thoughts in the comments below.

Yup, that’s right — just like Amazon’s Alexa and Google’s Assistant, Apple hires contractors to listen to Siri recordings in order to improve the accuracy and quality of the tool.

According to The Guardian, these contractors regularly hear confidential medical information, drug deals, and, ahem, intimate recordings, and are responsible for ‘grading’ what they listen to. The news comes from an anonymous whistleblower who voiced concerns that undisclosed Siri data could potentially be misused.

Apple doesn’t disclose that real people review Siri recordings, which comes as a shock to many as the company prides itself on taking consumer privacy more seriously than competitors.

While only a small percentage of Siri recordings are actually reviewed by Apple contractors, experts warn that recorded conversations could include important information like addresses or phone numbers.

Is the convenience of a voice assistant worth risking your personal information? Share your thoughts with us.

Edit: After reporting from The Guardian revealed this process, Apple has announced today that they are suspending this program.

A Teachable Moment from Monopoly

This hilarious — yet also slightly sad because it’s TRUE — video has been making the rounds on Twitter this week. Let’s just say we think you’ll find it relatable:

What Do English Kids Think of Butter Tarts?

If you’re Canadian, you know the amazingness that is the butter tart.

Twitter user Stewart Reynolds filmed his English niece trying the ooey gooey delicacy for the very first time, and the cute clip has over 5k views at the time of writing.