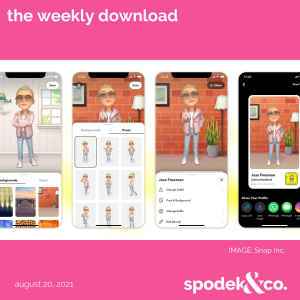 Welcome back and Happy Friday!

This week on your favourite round-up of digital updates: Pinterest introduces a new beauty search tool, Bitmoji enters a new dimension, Twitter works to minimize misleading Tweets and tests a new option for users to leave conversations, and as always, we’re finishing things off with Friday Fun.

It’s all in The Weekly Download – let’s dive in!

Everybody deserves a good hair day!

In an effort to marry beauty inclusion, inspiration and search, Pinterest has announced their latest hair pattern search tool.

As most Pinners search with the intention to find inspiration, this new tool not only diversifies representation and content visibility, it also helps users find the right content for them without going down the rabbit hole of niche searches.

Hopefully this addition will inspire other platforms to think in new ways and also encourage creators and brands to produce more diverse content for each of these audiences.

If you’ve used Snapchat recently, you may have noticed a slight update to your profile. Perhaps you’re looking a little more… Lifelike?

Bitmojis are now 3D! Snapchatters now have over 1,200 combinations of customization options available to them. From new body poses, facial expressions, backgrounds and gestures to choose from, users have endless options to express themselves freely. According to Snap, these new 3D avatars will be shared to Snap Profiles, Friendship Profiles and can be used off of the app, too.

Will you be checking out what your virtual self looks like in the third dimension?

As an extension of their existing reporting feature, Twitter has announced that they’re testing a new flag functionality for misleading Tweets.

We’re testing a feature for you to report Tweets that seem misleading – as you see them. Starting today, some people in the US, South Korea, and Australia will find the option to flag a Tweet as “It’s misleading” after clicking on Report Tweet.

Similarly to how you report other Tweets, you’ll tap the three dots in the top right corner and choose from a dropdown of reporting options – including “This tweet is misleading.” After the tweet is registered as misleading, users will then be prompted to provide further information about its content. Is it political, health related or “something else?”

Though there is no guarantee that any actions will actually be taken on the tweet, the reported information will be used to help support the development of “broader misinformation work,” says Twitter.

The feature is currently available in the U.S., South Korea and Australia. Assuming the trial period goes well, we hope to see it rolled out globally.

We’ve all been dragged into conversations we have no interest in tending to, and Twitter is no exception. That’s why the platform has announced that they’re working on a “Leave This Conversation” option to help give users more autonomy over the types of discussions they’re included in.

According to Social Media Today, leaving a conversation would allow Twitter users to untag themselves from the thread, taking away the ability for others to tag them and muting future notifications from the discussion.

Virtual conversations should not elicit stress or discomfort. Providing users with an option to disengage is the easiest way to help put healthy boundaries into action.

Do you think other social media platforms should adopt similar tools?

GRAB THE TISSUES! Check out this sweet grandma getting a new pair of slippers and other gifts from her TikTok followers. If this doesn’t make your Friday, we don’t know what will.