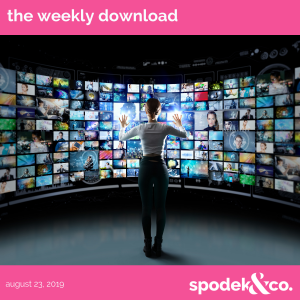 Welcome back to The Weekly Download! The weekend is beckoning, so let’s get to it!

We’re chatting about Amazon’s customer information leak, Shopify’s new web chat service, Facebook’s much anticipated “Off-Facebook Activity” tool, and Apple’s big push into TV. To finish it all off, we have some super cute Friday Fun that might be one of our favourite video clips ever!

A big “oops!” for Amazon this week — according to an article shared by Business Insider, the online retailer accidentally sent customers emails containing other shoppers’ private information.

One customer received an order confirmation email for a girls pink backpack, that also contained another shopper’s first and last name, home address, and other key details pertaining to the order.

The company notified all impacted customers, some of whom were understandably upset. Said one affected customer, “I’m angry. To have any personal information shared is a huge rights violation.”

Amazon says the slip up was due to a “technical issue” that has since been fixed.

Do you run an ecommerce website on the Shopify platform? Then say hello to Shopify Chat — the company’s first native chat client, launched late last week.

The new addition to the Shopify brand can host web conversations between merchants and customers using a web browser on Android or iOS devices or a laptop.

Shopify Chat is free for business websites and is another step towards the company’s previously stated goal to help small businesses run their operations with conversational AI.

“Off-Facebook Activity” is Facebook’s newest tool that will allow users to see the reach of the platform’s tracking outside of the social network. More than a year ago, Mark Zuckerberg announced this tool as “Clear History.”

Facebook collects information about its users in two ways: through the information you input into its websites and apps, and by tracking which websites you visit when you’re not on Facebook. Essentially, Facebook monitors your digital footprint to target you with ads. Users have never been able to see the external data Facebook collected about them, until now.

The new tool will display a summary of the third-party website that shared your visit with Facebook using a tracking pixel, and will allow you to disconnect that browsing history from your Facebook account. You can also opt out of future off-Facebook activity tracking, or choose which websites you don’t want to send your browsing activity to Facebook.

Select users in Ireland, South Korea, and Spain will gain access to the new tool first.

Apple TV Plus is the company’s next major launch – a new streaming-TV service that’s scheduled to launch this November.

One of the first shows – a drama about a morning news show starring big Hollywood names like Reese Witherspoon, Jennifer Aniston, and Steve Carell – has reportedly cost Apple more per episode than HBO paid for Game of Thrones.

And that’s without fire-breathing dragons! Wow.

Sources said Apple was considering charging somewhere in the $10-a-month range, though a free trial of some type may be in the works – and it’s clear that Apple isn’t cutting corners when it comes to their newest investment, committing $6 billion for original content.

Will you be tuning in to The Morning Show? Check out the teaser trailer below.

For Friday Fun, we’re bringing you the cutest video ever (do not try to fight us on this).

my grandparents came to look after me after my surgery and my grandad told me he wanted to make me feel better, he told me he’s been painting my nan’s nails for 30 years and that he wanted to paint mine and I needed to share this. “How many coats do you have on?”😭😭 pic.twitter.com/P0VJjZsHzn

Apparently we’re not the only ones tearing up at this sweet video. Since shared by Twitter user @aylawinter_, the video has gone viral with over 1 million likes, 208k retweets, and coverage by news outlets across Europe, including the BBC.