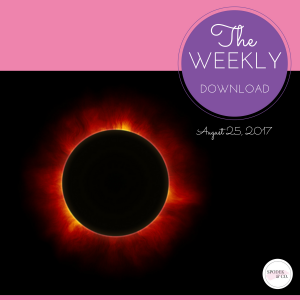 Who had a chance to check out the solar eclipse this week? It was certainly a hot topic of conversation! Were you able to get your hands on a pair of eclipse glasses, or did you DIY some protective eyewear?

There’s a lot of news and helpful tips to cover this week, so let’s jump right in!

From a philanthropic pup, to top-selling words for social media, and an influencer relationship gone wrong, we’ve certainly got a lot to cover.

Whatever the moment or feeling might be, McDonald’s wants you to know that there’s always McCafé for it!

In an attempt to bring McDonald’s McCafé premium offerings to life, McDonald’s India has rolled out a digital campaign called ‘There’s A McCafé For That’.

Says Rajdeepak Das, chief creative officer of Leo Burnett India, the agency behind the new campaign, “People come to McCafé to celebrate everything going on in their lives, over a beverage – highs and lows, love, romance, friendship, reunions. Every item on the McCafe menu means something different to each person, and has a story.”

What are your thoughts on the campaign? It’s certainly giving us a craving for a caffeinated treat!

The #BellLetsTalk hashtag tops the list of Canada’s top 5 hashtags of all time, as shared by Twitter Canada earlier this week.

Thanks for making #BellLetsTalk the most used hashtag ever in Canada as we work together to end the stigma around mental illness. #Hashtag10 https://t.co/srbEk6unrX

The hashtag, a cornerstone of Bell’s mental health campaign, had over 729 million interactions in 2017 and has helped raise over $86 million for mental health initiatives in Canada since its inception.

Studio 71, a company that pairs influencers with brands, contracted Mota for $325,000 and flew her and her dad/manager to Hawaii to film for the campaign. Following some alleged diva-like behaviour by dad and his encouragement to ignore her responsibilities while on location, Mota failed to deliver on her end of the contract.

Now, Studio 71 is suing Mota for breach of contract and fraud, among other claims, and is seeking both damages and a declaration that it doesn’t have to pay Mota because she didn’t hold up her end of their deal.

Partnering with an influencer to help further your content can be a great strategic move, but it doesn’t always have the payoff you might expect. What are your thoughts on influencer marketing despite this cautionary tale?

And speaking of influencers…

This week Amazon opened up its ‘influencers’ program to YouTube stars.
The initiative acts as an affiliate program and allows influencers to earn commissions on the products they promote. YouTubers who want to participate will have to apply and have their submissions vetted manually by Amazon staff, for now.

Applicants are considered based on factors like the size of the influencer’s online following, fan engagement on their posts, quality of content, and relevancy for Amazon, among other things.
While the program is only aimed at YouTube stars for now, plans to roll it out further across social media exist for the future.

Use these words on social media to attract more customers

Calls-to-action (CTAs) are so important when it comes to inspiring and influencing your followers online.
Some key takeaways:

How are you currently using CTAs? What have the results been like?

Man turns his Tinder profile into an epic PowerPoint-style presentation

They say that creativity can leave a lasting impression, and that’s certainly the case for Niket Biswas.
Last week, Biswas went viral when his over-the-top PowerPoint-style Tinder profile hit the popular dating platform. Covering topics like Trajectory of Growth, The Perks and Testimonials, the software engineer says he’s gotten 10 times more matches than he did with his previous profile.

Manny the Frenchie is using his fame to give back

He’s not just a pretty face — Manny the French Bulldog is using his star standing and undeniable cuteness to raise money for charity.

School starts soon, getting my sinks naps in while I can.

John Huang and Amber Chavez, Manny’s owners, have helped the pup amass a following of almost 3 million across Facebook, Instagram and Twitter. What started as a fun way to share cute pictures of Manny, now six years old, turned into something much bigger. With such a formidable following, it’s no shock that major brands and corporate sponsors have shown interest in working with Manny.

Huang and Chavez saw this as an opportunity to tie Manny’s platform and giving back together. With over $200,000 raised to date, Manny and his owners are a shining example of Internet fame done right!
Along the way, Huang and Chavez have learned a lot about growing a social media footprint organically. Their advice: