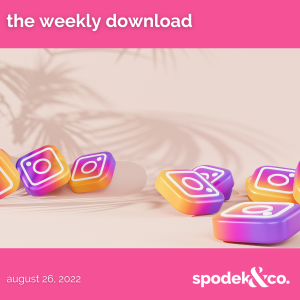 Happy Friday! We can’t believe we’re staring September right in the face… but it’s still summer, so grab a cold one and let’s dive into this week’s social media marketing news with The Weekly Download.

This week, brands are supporting journalist Lisa LaFlamme, Reels are where it’s at with engagement on Instagram, Twitter is testing visual representation of publisher links with Tweet Tiles, and WhatsApp is beta-testing Communities.

Everyone Is Going Grey for Lisa LaFlamme

If you’ve been following the story of CTV’s Lisa LaFlamme and her egregious termination, you know how people feel about that. But this isn’t just a story about LaFlamme and accusations of sexism and ageism: It’s also a look at how to do social media right when supporting someone.

Brands are behind LaFlamme, showing their support in various ways. Dove Canada changed its gold logo to a grey version across its social channels “to rally support for women from being aged out, often in the prime of their careers, because they’ve chosen to wear their hair grey,” said Laura Douglas, Dove Canada masterbrand manager. Dove is calling it the #keepthegrey campaign.

Dove has a long history of women-focused campaigns, but other brands have jumped in on the support as well, including Wendy’s, which changed the classic red hair of its mascot to grey.

We know that Reels are the way to go when it comes to engagement on Instagram — but by how much? Instagram was recently analyzed by HypeAuditor, which found that Reels, despite being the third-most-popular post option, have the most reach on the platform.

HypeAuditor measured relative reach by analyzing the number of people who saw each post, based on public data. Reels also generate more likes.

Photos still do well, but Reels are dominating the platform. Sorry, photo takers.

Twitter is testing a new format for publisher links called Tweet Tiles. What it does is display the links visually, including larger images, variable fonts, and prominent calls to action to drive more clicks, which would drive more revenue for the publisher.

Theoretically, it’s more eye-catching for subscribers who doom-scroll through their feed. The company says it’s an experiment, so not all users will see the new Tweet Tile format — and even if you do, when you retweet, it may not show up in the same format.

Twitter hasn’t announced a launch date as of yet.

We don’t talk a lot about WhatsApp, but we have three active chats on the platform, so when we heard in April that the Communities feature was coming, we waited. Now it’s live for beta users.

A quick refresher on Communities, for those who don’t remember: It’s basically Meta’s version of Slack, where one overarching community has splinter groups for personal conversations.

This isn’t the only recent update to the platform. WhatsApp has also increased the group size to 512, rolled out emoji reactions, and increased the file-sharing limit to 2GB.

Communities is available in certain countries during the beta testing.

I visited the Uber Chicago office yesterday. Here are my takeaways: 1. The architecture is intentional and over the top in the best way possible 2. The… 212 comments on LinkedIn

And yes, it’s only Friday, but go ahead and bookmark this for Monday morning: