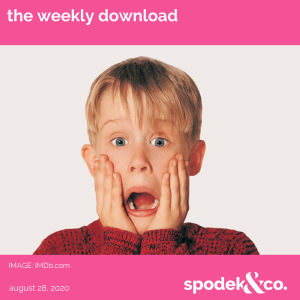 Oh, hello again! Welcome back to another edition of The Weekly Download. Here’s what we’re chatting about this week:

A new report confirms Facebook as a major source of health misinformation as the platform warns Audience Network Advertisers of big changes ahead that could affect their bottom lines, Twitter experiments with a “Quotes” count on tweets, Microsoft announces the end of Internet Explorer, and Friday Fun from Kevin McAllister — oops, we mean Macaulay Culkin.

A new report this week found that Facebook has facilitated the spread of a wide range of health misinformation, likely contributing to the COVID-19 death toll as a result.

Avaaz’s findings highlight concerns about the role Facebook plays in spreading dangerous misinformation and underscores the fact that the platform has a serious issue on its hands. How will Facebook address the spread and police false information to protect its users? Misinformation has real-life consequences – especially when public health is at risk.

Do you find the new report surprising? Check out the report in full here.

Facebook Warns Advertisers of Audience Network Effectiveness Due to iOS 14

Facebook is warning Audience Network advertisers that updates to user privacy settings as part of iOS 14 (due to be released next month) will have major impacts on the effectiveness of their ads. According to the social network, the new updates may render the option completely ineffective in some cases.

According to Social Media Today, here’s why Facebook is anticipating some adverse outcomes:

“The specific change that Facebook’s referring to is the update to Apple’s Identifier for Advertisers (IDFA). IDFA enables app owners to track individual user data within apps – the tracker cloaks a users’ personal information, but still provides data on in-app activity, like actions taken in the app, acquisition chains, etc.

Users have always been able to opt-out of IDFA tracking, but the settings for such are not readily accessible, and require some digging to find. The update to iOS 14 will make IDFA opt-in instead, which will see many users switching off the tracking option.”

While the revenue impacts for Facebook may not be significant, data tracking impacts and implications for Audience Network advertisers will be big. If you use Facebook’s Audience Network, you may need to re-evaluate your approach – reach out to us for help.

In an effort to make it easier to see what conversations are taking place around tweets, Twitter is testing (another) new feature. The company confirmed it’s testing a new “Quotes” count on tweets, an engagement metric that would sit alongside the tweet’s existing retweets and likes counts, appearing beneath the tweet itself.

According to TechCrunch, the feature has already shown up for a number of users and so far, it’s received mixed reviews.

Check out a sample of the new feature below:

Microsoft Will Drop Support for Internet Explorer in 2021

The time has come – Microsoft will drop support across its Microsoft 365 apps and services for IE11 next year. Online services like Office 365, OneDrive, Outlook and more will no longer support Internet Explorer 11 as of August 17, 2021.

Will you be sad to see Internet Explorer go? We have a feeling you won’t 😉

A hilarious tweet from Macaulay Culkin made the Internet rounds this week after the famous child star celebrated a milestone birthday:

And of course, the responses were just as good:

Harry looks well for his age, Marv not so good pic.twitter.com/nR6PgmJxBn