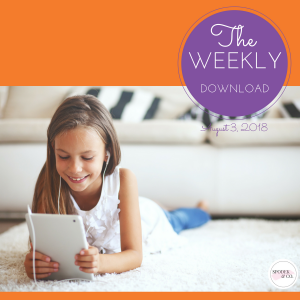 Happy Friday, folks! It’s a long weekend for most of us here at Spodek & Co., and with that, we bring you The Weekly Download.

This week we explore Facebook and Instagram’s new time management tools, Whatsapp updates, a YouTube alternative for kids, the 4-11 on Reddit’s hacking, and a Facebook blooper with some added Friday Fun!

On Wednesday Facebook and Instagram launched an activity dashboard so users can better gauge their usage. The goal? For social media users to analyze and control how much time they’re spending on the two platforms. This is the first time a mainstream social media platform has made an effort encouraging their users to limit their online time.

According to Facebook they “developed these tools based on collaboration and inspiration from leading mental health experts and organization, academic, our own extensive research and feedback from our community.” You’ve got to give Facebook and Instagram props for their efforts in ensuring “…the time people spend on Facebook and Instagram to be intentional, positive and inspiring.” This type of transparency sends a pretty compelling message from the world’s most influential social media platforms.

Looking to access the habit inhibiting tools? It’s simple. “Go to the settings page on either app. On Instagram tap “Your Activity,” and on Facebook, tap “Your Time on Facebook.” At the top, you’ll see a dashboard showing your average time for that app on that device.” They’ve also installed a feature that alerts you once you’ve reached your daily allotted time on the application, plus you can mute push notifications.

Will you be checking your total time spent on either app regularly?

Whatsapp’s latest update introduced a frequently requested feature: voice and video calls for up to four people. Whatsapp has 1.5 billion monthly users, and the service supports more than 2 billion calling minutes a day! Yet another Facebook-owned app, it feels strangely late to the game, with its parent company releasing group calls months ago.

Delay aside, however, Whatsapp users can now select “add participant” on the top right of their screen. One thing Whatsapp is doing to one-up their competitors is pretty cool. For the low, low cost of $50 million (a donation made by co-founder Brian Acton), all calls will now be encrypted. Acton became an advocate for issues in privacy after Facebook’s Cambridge Analytica scandal.

SuperAwesome is a start-up company that creates technology for children. When they saw a need for safe video apps for kids, they developed a social video player within their PopJam Connect platform.

What makes PopJam kid friendly? They follow the COPPA and GDPR-K guidelines meaning that they will not collect the data of children under 13 years of age, nor will they use or distribute under-13’s personal data for corporate gain. The new app is designed to compete with YouTube, currently facing a class-action lawsuit for not adhering to these guidelines.

According to kidscreen, “The video player also offers kid-safe monetization options that do not collect data and can be customized by the publisher, including a self-service dashboard to create schedules and report video and social content.”

Although YouTube is home-base for many family and children’s content publishers and brands, parents became concerned for their kids when they realized how much unsuitable content appeared regularly on the screens of their little ones.

Known as one of the world’s biggest websites, Reddit joined the “hacked” club recently, announcing a data breach compromising usernames, passwords and email addresses of groups of users. Reddit is working with law enforcement on an investigation about the privacy breach and hacking. They are still trying to determine what accounts were affected and will update the community once they learn more.

This serves as an important reminder to make sure you’re always using complex passwords as an effort to protect your personal information from online abusers. If you’re not already using a password storage platform such as Dashlane or LastPass to protect your passwords and generate new ones, you may want to consider doing so. At the very least there are free password generators online you can use.

Facebook made an ‘oopsie’ this week, one that definitely got eagle-eyed users talking. When Facebook accidentally added a plane emoji to its library of reactions, people immediately attempted to deconstruct the applications reasoning. By the look of users’ responses, the chatter was less about the addition and more about what a plane emoji would signify as a response to content posts. Moral of the story? People LOVE their emojis, and consider them an intricate part of online communications.

Facebook claimed it was an accident and that the feature “was created as a part of an employee hackathon and wasn’t clear for takeoff.” Social Media Today raises a solid question, why was Facebook creating new Reactions and will they ever get released or was it just a tease? We’ll have to wait and see!

Love, Haha, Wow, and… Plane? Some Facebook users briefly had the option to react to posts with airplane or fire emoji https://t.co/Jh77AhqvWk via socialmedia2day

There are some pretty cool changes happening in the social media world. People are waking up to the reality of security threats, as well as debating the impact daily social media engagement can have on their lives. Seeing users and business leaders shifting social media standards for more positive and safe usage is inspiring and we can’t wait to see what’s next! Any ideas?

Putting this group music superstars together is a “No Brainer” – have a listen to the newest release from DJ Khaled, Justin Bieber, Chance the Rapper and Quavo. Get ready to shoulder dance at your desk!

And then there are the music makers of the future…
“No pants, no problem. The show must go on!!!” – Kristen Bell

No pants, no problem. The show must go on!!! #frozen ❄❄❄ (A good wedgie always helps me hit the high notes, too)