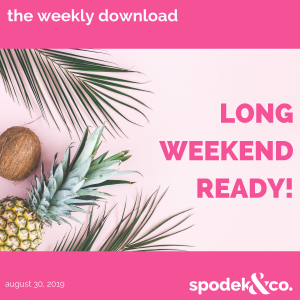 Labour Day weekend marks the unofficial end of summer, but don’t worry! We’ve got another edition of The Weekly Download to brighten your day.

On the agenda today: how an influencer is being blackmailed for her own content, people are stepping up to save the Amazon, the ups and downs of TikTok’s virality, and Google offers a bug bounty. And for Friday Fun, we’re sharing how Toronto fans made the best of an abrupt end to a Jonas Brothers concert this week.

Influencer Kaitlyn “Amouranth” Siragusa has gone public with a story about an anonymous blackmailer targeting her through her Instagram content.

Amouranth, a Twitch star, had several Instagram posts and stories removed for being “inappropriate,” even though the posts complied with Instagram’s policies. Then, the demands for money started.

Amouranth suspects this blackmailer actually works for Facebook (Instagram’s parent company) based on the inside knowledge they’ve shared within their emails and threats, but hasn’t been able to get confirmation from the social media giant. Instead, Facebook maintains that the posts were removed due to violation of Instagram’s Community Guidelines.

It’s a strange story, but sadly, one that might become more common as we see the increasing value of online content – especially for those that make it their livelihood.

Tech Companies, Celebs, and Government All Work to Help Preserve the Amazon

After a record number of fires ravaged the Amazon, a number of companies, philanthropists and governments have stepped up to donate and lend support in hopes of preserving the region.

Among the donors and volunteers: Apple, Leonardo DiCaprio, and Prime Minister Justin Trudeau.

The Amazon rainforest burning from above, captured just two days ago by Brazilian photographer @VictorMoriyama on an overflight with @greenpeacebrasil. Now is the time to take action. Help support the @EarthAlliance Amazon Forest Fund. Please visit ealliance.org/amazonfund (link in bio) for more information and to donate.

Scientists have already recorded more than 74,000 fires in Brazil this year, almost doubling the number of fires recorded in 2018.

Is TikTok a Time Bomb?

TikTok is a highly addictive app that has captured the attention of teens everywhere. Users can record funny 15-second videos and use TikTok to incorporate music and effects. Teens are spending more time on TikTok than Facebook, and, fun fact – it’s where Lil Nas X’s “Old Town Road” got its extremely viral start.

It sounds harmless enough, but should we be worried about the app’s approach to leveraging user data and AI? An article published this week by Fast Company takes a deeper dive into the app, its parent company, and its quick rise to fame – mainly with the help of billions of ad dollars and hefty influencer deals.

According to Bloomberg, “Within a day, the app can get to know you so well it feels like it’s reading your mind.” While it makes for a customized browsing experience, it also comes with concerns; on one hand, TikTok’s algorithms highlight the potential of AI and machine learning, but it’s also worrisome in the age of user data misuse.

Have you used TikTok? Tell us in the comments below.

And speaking of user data misuse, Google will be paying security researchers who find “verifiably and unambiguous evidence” of data abuse using its platforms.

It’s the company’s way of catching those who misuse user data collected through Android apps or Chrome extensions, and also avoid a major scandal (ahem, Facebook).

Google says anyone who identifies “situations where user data is being used or sold unexpectedly, or repurposed in an illegitimate way without user consent” is eligible for a “bug bounty” payout.

While Google hasn’t yet divulged just how much cash is in it for those who catch instances of user data misuse, it’s estimated that a single report could net $50,000.

Oh Toronto, we just love you!

The Jonas Brothers played at the Scotiabank Centre this past week, and while the concerts were undoubtedly amazing, the trio ran into some technical difficulties.

When the band was forced to close the show early without an encore, fans rallied to sing Burnin’ Up and Sucker – two of their most popular hits.

When the Jonas Brothers dip before ‘Burnin Up’ so the fans start singing it 😖😭 pic.twitter.com/Vb6VPeqhQW

Now if that doesn’t send you off toward the long weekend with a smile on your face, we don’t know what will!