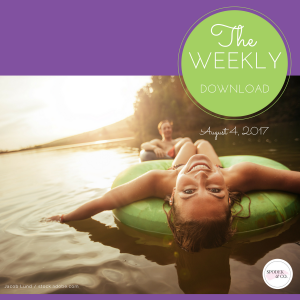 Happy August long weekend! It’s Simcoe Day here in Ontario and called different things in different places so let’s go for the generic version. How will you be spending one of the last long weekends of the summer?

This week we have a lot to chat about – content creators, there’s a lot for you here – including how to approach branded content, HBO’s new controversial TV show, a better way to discover Canadian content, organizing your social feeds for biz, Friday Fun, and a new edition of Ada’s Sisters.

Brands need to let content creators do what they do best

Stewart Reynolds proved that it’s possible for influencers to surpass millions of views on branded content… it just has to be done right.

Reynolds’ honest recount of producing branded content in partnership with a popular chicken restaurant is not only giggle-worthy, but also insightful. He drives home the importance of placing the brand carefully into the content creator’s world, and not the other way around.

Says Reynolds, “If Brands can match themselves with the right Content Creator and then simply let the Content Creator do what they do while putting an arm around the Brand, everyone wins.”

A new HBO series by Game of Thrones show runners sparked outrage last week following its announcement. While the show does not yet have any scripts or plot details, it will take place in an alternate reality in present day in which the American Civil War had a different outcome and slavery remains legal.

April Reign, American activist and former lawyer, is calling on the Twitterverse to express its concern over the upcoming series using #noconfederate. Reign’s #oscarssowhite tweets sparked extensive debate about the lack of diversity in Hollywood just last year.

As noted by Reign, “Confederate is not alternate history, but a painful and recent reminder of how much further we still need to go toward equality.”

She hopes that the voicing these concerns publicly will force HBO to cancel this idea now and avoid an even bigger backlash during its premiere.

We believe the time to speak up is now, before the show has been written or cast. Before @hbo invests too much money into #Confederate.

This week YouTube launched its YouTube Spotlight Canada channel to showcase Canada’s top stars in both French and English, alongside emerging Canadian talent.

The channel will highlight creators and videos that are most popular among Canadians and will feature themed playlists to help Canadians explore trending topics, news stories and even moments from Canadian history.

Starting August 2, YouTube is also launching its popular On the Rise feature in Canada. The feature will identify Canadian creators who are growing rapidly and showcase their videos in the Trending tab on YouTube, helping them expand their audience online.

My colleague Andy Crestodina from Orbit Media is doing an annual blogger survey. Every year he asks 1,000 bloggers a few quick questions to find out the current state of content marketing.

Would you be willing to share a bit about your approach to blogging for his survey? The results are always interesting and will be shared with participants.
If so, here’s the survey.

How a simple .txt could help win the battle against ad fraud

It’s estimated that advertisers will lose more than US$16 billion to online ad fraud this year, so it comes as no surprise that ad publishers and sellers alike are eagerly searching for a solution to the problem.
Enter “ads.txt”, a project developed by the Interactive Advertising Bureau (IAB) intended to eliminate the black market for digital advertising inventory. Ads.txt creates a pre-formatted index of authorized sellers that publishers can post to their domains. Programmatic buyers can then use these publisher ads.txt files to screen for fake or misrepresented inventory.

The process also involves adding a simple .txt file onto a publisher’s site that displays the names of permitted exchanges for all to see, increasing visibility and potential “white list” approach for advertisers.
While it’s not a total solution to the problem, it’s certainly a step in the right direction, and one that will bring light to the severity of ad fraud in Canada.

How to organize your social media feeds

This week I was asked to share some of my top tips for social media organization from a biz perspective as part of the Rogers Business Forum. Check out the article to learn more about being strategic when it comes to social and the importance of using apps to help you boost productivity.

Coincidence or conspiracy for Outback Steakhouse?

Last week, Twitter user @eatmyaesthetics had the Internet buzzing over Outback Steakhouse, but not for the Bloomin’ Onions.

After looking at the chain’s locations on a map, it was apparent that the layout of Outback’s locations in several cities bear an eerie resemblance to a pentagram. So Twitter did what it does best: investigate.

With almost 1,000 locations across the country, it turns out it’s just a strange coincidence. Outback had some seriously awesome and witty responses for all the drama, though.

When it comes to confidence, we could all take some cues from the adorable Shilah Calvert-Yin. Shilah has uncombable hair syndrome, a rare disorder of the hair shaft that occurs due to a genetic mutation in the hair. But Shilah loves her hair and the way it distinguishes her from her peers. You may never complain about a bad hair day again.

Shilah embraces the way she looks & has so much attitude & confidence that she just rocks her own style. #uncombablehairsyndrome

How to lose a communications director in 10 days

President Trump’s recently appointed communications director, Anthony Scaramucci, is already on the outs after a whole 10 days in office.

While the Internet was aflame with hilarious memes, Kate Hudson created one of our favourites.

Box office results are in! The #1 comedy in America!

And the fun continued… don’t you just love @thesarahgorman’s tweet?

i've never been more ready to use my skills. pic.twitter.com/E17WMhaKty

You might remember an AirBnB story we talked about a few months ago where a host cancelled a reservation when he found out his guests were Asian.

Happy to tell you about the happy ending to that story – because karma is ALSO Asian.
We also want to tell you about X factor Ventures, a new VC fund that will invest $3 million US in female-led startups. Vimeo just promoted Anjali Sud as their new CEO and we’re thrilled, as well as Google’s promotion.

We are excited for the newest Doctor Who and not that concerned about her gender because the Time Lord is an ALIEN.

And don’t turn your back on that Roomba! It’s making a map of your house!