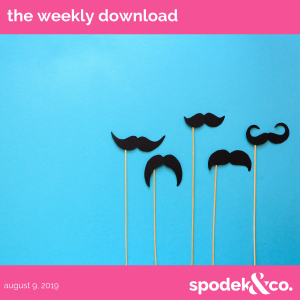 Looking for the TL;DR on the top news this week? Look no further… Welcome to The Weekly Download!

On the hot sheet today: a lot of Facebook and Instagram news, including a name change,  a “click injection” fraud lawsuit, more struggles to protect user data and a content marketer’s dream come true. We’re finishing off with a perfect mix of Friday Fun that’s both hilarious and cute.

You’ll see the new titles when you’re searching in your device’s app store. While your app names on your home screen will stay the same (for now), it’s likely that you’ll see “from Facebook” on splash screens.

So why the change? According to Mark Zuckerberg, it’s “to be clearer about the products and services that are part of Facebook.”

And more Facebook news this week — the company is accusing two app developers of using malware to hijack people’s phones to fraudulently click on ads to make money.

In a blog post released on Tuesday, Facebook announced it has filed suit against LionMobi and Jedimobi, app developers based in Hong Kong and Singapore respectively, with claims of “click injection” fraud.

The developers made apps available on the Google Play store to infect their users’ phones with malware. The malware created fake user clicks on Facebook ads that appeared on the users’ phones, giving the impression that the users had clicked on the ads.

According to the post, the companies “generated unearned payouts from Facebook for misrepresenting that a real person had clicked on the ads. The ads were part of Facebook’s Audience Network.”

Facebook says that this lawsuit is the first of its kind against this practice. Although Facebook did not report how many users were impacted or how much money developers made from the purported scheme, it confirms that all impacted advertisers were refunded by Facebook in March 2019.

This is BIG NEWS for users who have had to find workarounds to help schedule content on Instagram. Previously, social media managers have had to rely on a range of alternative posting options — many of which are limited due to Instagram’s API restrictions.

The new functionality means you’ll be able to pre-plan content and see how it fits with the rest of your feed’s overall aesthetic before hitting “share.”

Hyp3r, an apparently trusted marketing partner of Facebook and Instagram, came under fire this week for secretly collecting and storing location data on millions of users, against social network policy.

The company has been scraping huge quantities of data from Instagram and using it to build detailed profiles of user movements and interests. Yikes.

Since Business Insider broke the news, Instagram confirmed that Hyp3r had violated its policies and has now been removed from the platform to protect user data.

As noted by TechCrunch, it’s hard to see how Hyp3r could do this for years without intervention by the platforms except if the latter were either ignorant or complicit. The situation highlights how Facebook is still struggling to protect user data and monitor developer access following the Cambridge Analytica scandal.

Ever wondered if other people might be able to pull off Nick Offerman’s impressive ‘stache?

And now, please standby for some unreal cuteness…

The struggles of having a little sister! 💛💛💛 pic.twitter.com/r6gN8v20NA