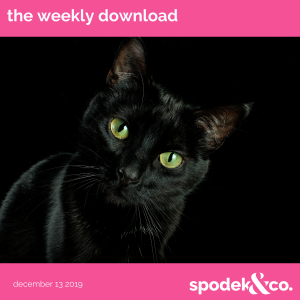 It’s Friday the 13th, and we’re back with another edition of The Weekly Download that’s so good, it’s scary!

On the docket today: Away’s toxic culture is exposed, “new beginnings” following Peloton ad backlash, a twist on GIFs, Netflix sparks brand chaos on Twitter, Snapchat’s take on deepfakes, TIME’s Person of the Year, and a look back at some of the best of 2019 for Friday Fun.

Away CEO Steps Down After Report on Company Culture Goes Public

Trendy luggage company Away is in the spotlight this week after an investigation published by The Verge went viral. The article highlighted the company’s “cutthroat culture” and uncovered several instances of workplace bullying at the hands of the company’s CEO, Steph Korey.

Korey’s Slack messages to team members were revealed in the report, demonstrating berating behaviour and pressure to work extreme hours on a number of occasions.

Since the report’s publication, Korey has stepped down as CEO of the company. Much of the conversation online around the report has been about fair working practices and employee treatment at startups.

In a follow up to last week’s chatter about Peloton’s ad flop, we’re happy to report that Ryan Reynolds and Aviation Gin have successfully added a little humour to the situation.

A new parody ad released late last week by the gin company, shows Monica Ruiz, the same actress from the Peloton commercial, at the bar with two friends.

Her friends struggle to find the right words to cheer her up before they toast to “new beginnings” and Ruiz downs her martini in a single gulp.

The short clip brought a little humor to the Peloton backlash, which is still generating buzz online, being called “sexist” and “tone-deaf.” According to Ruiz, she’s grateful to both Peloton and Aviation Gin for the work opportunities, but some say she’ll always be known as the Peloton girl.

Coming soon – a twist on GIFs!

On Tuesday, Giphy unveiled a new video hub where it will host short-form video content — with sound! — from media partners like Universal and BBC America.

Videos will be capped at 30 seconds, but Giphy recommends 15 seconds at most in order to maintain viewer attention.

The platform will only host short-form videos for media partners with no immediate plans to open the feature up to the public.

Did you follow along with this strange-but-true story over the past week?

And while it was kind of weird, what was even WEIRDER was the brand responses that it generated:

How likely would you be to recommend us to a friend?

The Mandalorian continues to dominate

Cameos is Snapchat’s Take on Deepfakes

Snapchat is launching a new feature called Cameos that uses selfies to replace the faces of people in videos that you can share with friends. Essentially, it’s a take on deepfakes for GIFs. Cameos can be used as an alternative to Bitmoji for a quick reaction on the app.

Some French users have been granted access to the feature already. Snapchat confirmed that this is a test before Cameos makes its global debut soon.

TIME Reveals Greta Thunberg as its 2019 Person of the Year

Greta Thunberg was announced this week as TIME’s 2019 Person of the Year. If you’ve been following the 16-year-old climate activist’s journey so far, the title comes as no surprise.

Thunberg has become the face of the youth climate movement leading the largest climate strike in history, which included an estimated 4 million people across 161 countries, and has addressed the United Nations, US Congress, and UK Parliament.

You can read TIME’s inspiring feature article on Greta here.

For Friday Fun, it’s time to take a look at the year that was!

#YouTubeRewind is the company’s yearly recap that celebrates trending creators, music and moments. After last year’s Rewind became the platform’s most disliked video in its history, YouTube was committed to making something people liked for 2019.

How many of these videos were on your watch list this past year?

Merriam-Webster’s Words of the Year 2019

And finally, they has earned the top spot as Merriam-Webster’s word of the year. According to the data, lookups for they increased by 313% in 2019 over the previous year.