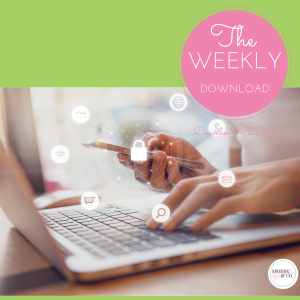 Is it Friday already? Whew, the days are flying by! Another successful week calls for the next installment of The Weekly Download.

There’s lots to chat about today, including Google’s mock ad fiasco, Amazon’s plans to open a cashier’less Amazon Go store, and TIME Magazine’s “people” of the Year. And, as if we needed reminding, we look at some of the most noteworthy data breaches of 2018, Instagram’s new ‘countdown’ sticker and of course, Friday Fun!

You better get comfortable, this one’s a doozey!

Human error? At a technology company? Say it ain’t so! (sarcasm font)
On December 4th, a Google employee made the old “hit send before proofreading” mistake. Except in this case, it could end up costing the tech giant millions of dollars!

In a training session gone terribly wrong, the rather unlucky staffer accidentally published a mock ad to a large number of both webpages and apps. The ad was live for about 45 minutes in the U.S. and Australia before anyone noticed the mistake.

Of course, ads cost money. But in this case, Google is going to honor any financial hits taken due to this error.

The Store with No Queues

According to “sources,” retail giant Amazon is set to expand their Amazon Go stores outside of the U.S.
Where? In the busiest shopping area of London: Oxford Circus. The shop will be anywhere between 3,000 and 5,000 square feet and will feature some of the most sophisticated shopping technology in the world.

Not familiar with Amazon Go? Check out this wildly futuristic operation!

For the second year in a row, TIME Magazine has chosen a group rather than an individual for their iconic “Person of the Year” edition. The 2018 honour goes to “The Guardians and the War on Truth” – a group of journalists representative of the many journalists worldwide who have lost their freedom, even their lives, while speaking truth to power.

Time’s editor-in-chief, Edward Felsenthal, wrote: “They are representative of a broader fight by countless others around the world — as of Dec. 10, at least 52 journalists have been murdered in 2018 — who risk all to tell the story of our time.”

Included in a series of four covers are murdered Washington Post columnist Jamal Khashoggi; Maria Ressa, the arrested editor of a Philippine news website critical of President Rodrigo Duterte; Wa Lone and Kyaw Soe Oo, two Reuters journalists imprisoned in Myanmar for nearly a year for investigating the massacre of Rohingya Muslims; and the staff at the Capital Gazette newspaper in Annapolis, Md. where four journalists and a sales assistant were killed by a gunman in June.

The first time that Time magazine has selected a dead (murdered) person for Person of the Year: Jamal Khashoggi, killed by the Saudi government. pic.twitter.com/VGl2TrZPvM

It feels lately like “hacking is the new black.” And no industry in any country is safe from a potential loss of personal data, whether due to an actual data theft, a bug in the website’s security system, or the mishandling (even selling) of people’s data by big corporations.

Business Insider created a handy list of the most significant data breaches of the year. And while it felt, with all the attention and reporting, that the Facebook and Cambridge Analytica data scandals must have been the worst of the year, guess what? They didn’t even break the top five!

What I also find interesting about this list is that it includes data breaches that I hadn’t even heard about! I’m sure you’ll find a few surprises as well. We’ll leave you with a teaser, the number one hack of 2018:

Aadhar, a 12-digit security code issued by the Indian government which collects information on the citizens’ identity and biometric info, leaked the highly private information of 1.1 billion individuals.

You know it’s the holiday season when the Advent calendars come out. First used by German Lutherans in the 19th and 20th centuries, they’re basically a fun way for families to countdown the days ‘til Christmas. You’ll find them on your fireplace mantle, the checkout counter at every retail store, and of course, on social media.
Instagram has just added a new ‘countdown’ sticker to their repertoire, making it easy to send exciting (or annoying) reminders to your following about special, upcoming events! Definitely annoying if they’re going to Mexico in the dead of winter and you’re not! LOL

This is an excellent tool for brands and businesses to use to remind followers about product launches, store openings, Facebook Lives and more. This feature is a definite must add to your 2019 Instagram strategy.

Alright, let’s wind things down with some Friday Fun. Do we have any Stranger Things fans out there? Well, here’s Netflix’s first teaser release for the third season. We want more!

Avengers fans, it’s likely you’ve already seen this as it’s trending on YouTube with over 68 million views in less than a week – but let’s watch it again!