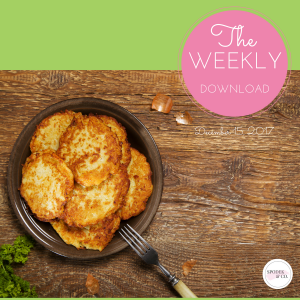 Happy Friday, and of course, a Happy Hanukkah to all those celebrating!

More changes are coming to Instagram, the top tweets of 2017, saying goodbye to a “creepy” Facebook feature, YouTube’s very own subscription-based streaming service, and a new episode of Ada’s Sisters are all in this week’s version of The Weekly Download.

Reports say that Instagram may be in the process of building a standalone direct message app, similar to Snapchat. The app is currently in test mode in six countries only for now (Chile, Israel, Portugal, Italy, Turkey and Uruguay).

When users install the Direct app, Instagram will automatically stop displaying chats. A swipe to the left will bring you straight to Direct, while doing the same from Direct’s inbox will send you back to Instagram.

The sneak peeks we’ve seen so far make the app seem simple. Some have argued that the new app doesn’t really do anything except pull the chat function out of Instagram.

This one may come as no surprise – a beautiful message and equally stunning photograph shared by former president Barack Obama following the Charlottesville march has earned the title of most-liked tweet in 2017.

"No one is born hating another person because of the color of his skin or his background or his religion…" pic.twitter.com/InZ58zkoAm

Also among the top 10 were 16-year-old Carter Wilkerson on the quest for a year of free chicken nuggets from Wendy’s,

HELP ME PLEASE. A MAN NEEDS HIS NUGGS pic.twitter.com/4SrfHmEMo3

and LeBron James’s response to President Trump’s decision to rescind his White House invitation to the Golden State Warriors.

U bum @StephenCurry30 already said he ain't going! So therefore ain't no invite. Going to White House was a great honor until you showed up!

Facebook is making it harder to see what your friends are liking and commenting on. The app’s ticker feed, which showed real-time updates on friend activity, was recently axed.

The tool was launched in 2011 and showed everything on Facebook as it happened, including not just status updates but likes and comments, earning it the nickname of “creeper feed”. Facebook has confirmed the ticker has been removed, but has been mum on why it decided to cut the feature.

Will you miss the ticker or are you happy to see it go?

In an effort to keep up with other big subscription-based streaming players like Spotify and Apple Music, YouTube plans to launch a new music subscription service in March.

The new service could help appease record-industry executives who have pushed for more revenue from YouTube. Music is one of the most popular genres of video on YouTube, which attracts more than a billion users a month.

The service, initially being called Remix, would include Spotify-like on-demand streaming and would incorporate other elements from YouTube, like video clips. YouTube has reportedly reached out to artists to seek their help in promoting Remix.

The Last Jedi Cast Answers the Web’s Most Searched Questions

Ada’s Sisters – Episode 75: Imposter Syndrome, Marvel women in suits, #MeToo, VC Clubs for women
There’s a fascinating article this month in Fast Company identifying women as the canary in the data mine. And we’ll talk about the seven ways to fight imposter syndrome. If you don’t know what that is, we’ll elucidate you. And we’ll tell you about a new VC club for women.

Plus, Time’s people of the year are the silence breakers, which, on the anniversary of the Montreal Massacre, is very appropriate. Also appropriate? The Twitterverse’s response to Marvel’s superhero pic.