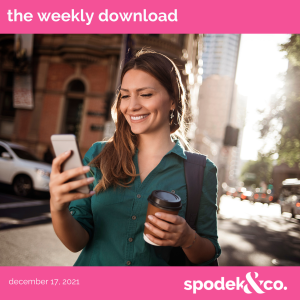 This has been a challenging week for many of us with the impact of the fourth wave of the pandemic, especially with the holidays just around the corner. Still, it’s business as usual in the digital world, and we are here to keep you up to date. In today’s edition of The Weekly Download: Twitter adds Auto Captions for video, Instagram reels gain TikTok-like visual replies feature, WhatsApp allows preview of voice messages before sending, and Adobe introduces free Creative Cloud Express, plus some Friday Fun.

Twitter is rolling out automatic captions for video and they will be available globally in 30 different languages.

The new feature will be available for new video uploads only. Older videos that did not have captions, will still not have them.

The Meta-owned platform has added the ability to add user comments as visual stickers to Reels. This new feature, Visual Replies, allows creators to reply to user comments with Reels content, similar to how TikTok lets users post video comments on its platform.

There has been a massive boost in the number of creators on Instagram since the initial launch of its shopping tools last year and focusing on features that add value for creators is a smart move. Looking forward to 2022, we expect Instagram to make Reels more feature-packed and refined for content creators to keep up with its competitors.

So, what do you think of the new Visual Replies feature? Let us know your thoughts in the comments below.

WhatsApp announced on Twitter that users will be able to preview (before sending), a voice message via a quirky animated video.

The video highlights the frustration of re-recording a voice message multiple times before getting it right. Although previewing the message does not solve this problem, it does save users time and allows the ability to listen to the message before sending.

Adobe has hit the headlines with the introduction of its ne

“Empowering people to create and communicate has always been core to Adobe’s mission of changing the world through digital experiences. Creative Cloud Express makes it possible for everyone, independent of skill level, to make something great.”

The new suite of free editing tools was created so that it is accessible to everyone, regardless of level of experience. It also comes with generous features, previously available to paid subscribers only.

Could we love you more, Ryan?