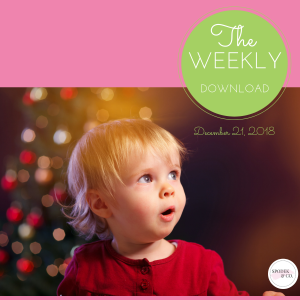 Happy Friday, everyone! Welcome to the holiday edition of The Weekly Download. We’ll try to keep it short and sweet – but, busy holiday season or not, there always seems to be a lot of fires in the digital world!

Data sharing doesn’t sound too scary, right? Pair it with Facebook and your feelings will likely change. Last Friday, the news broke that Facebook had supplied some of the world’s leading tech companies with access to their users’ personal data, including friends’ feeds, private messages, contact info and calendar entries. Did we mention without permission or knowledge?

These “Business Partnerships” with industry giants like Amazon, Netflix, Microsoft, Spotify and more were in place as early as 2010, and remained active until 2017. These “business partners” were excused from Facebook’s usual privacy rules and conditions.

Facebook’s reasoning? These business partners were referred to as “integration partners,” the way certain applications are, and were able to act as “functionally extensions of Facebook itself.” This is a bit of a stretch, to say the least.

The exposure of data is reported to have affected almost seven million Facebook users. If you were one of the individuals potentially impacted, you will receive notification from Facebook.

So what does Facebook say about all this? We had many long exchanges with the company, which provided a lot of useful context and information.
The key argument: Facebook doesn't need explicit consent because these partners are all functionally extensions of Facebook itself.

You may have noticed some changes to your Instagram feed and profile recently. That’s because Instagram has rolled out a number of new features to make interactions with friends more diverse and exciting.
So, what are these new features? First, your friends can now respond to your questions sticker with songs from the music library, allowing you to share your favourites to your story.

“You’ll see the new music icon when you use the questions sticker. When you friends respond, they can choose a song directly from the music library and share it with you. Open the viewer’s list to see all their responses, and tap the play button to listen to the songs… You’ll also see new effects that respond to the beats and sounds of a song.”
Secondly, you can now better connect on Instagram Live by using the question sticker.

“To ask a question and have it answered Live, go to someone’s story and respond to their questions sticker as you normally would. If they go Live to answer, you’ll see “Q&A” in your stories tray. Join the Live video and you’ll see the question they’re answering at that moment.”

And finally, as we mentioned last week, you can now countdown to your favourite moments like Christmas, the ball drop on New Year’s Eve, or a vacation you’ve been looking forward to for months!

Last year, along with many other big cities across North America, Toronto vied for the chance to be the home of Amazon’s HQ2. New York and Northern Virginia were the big winners. But, Canada’s largest city must have made an impression!

This week, Amazon announced it had opened “…a brand new, 113,000-square-foot office in the heart of downtown Toronto.”

According to Toronto’s mayor John Tory, “Amazon’s expansion of its Toronto Tech Hub underscored the incredible tech talent we have in our city, and jobs like these allow us to retain and attract high tech talent locally.”
Amazon’s arrival means big things for Toronto’s tech industry and the city’s employment, as a larger footprint for Amazon means more jobs! And that’s never a bad thing.

Thrilled to see Amazon growing back home in Canada as we expand capabilities in software development, machine learning, cloud computing, digital advertising, and artificial intelligence in the City of Toronto and beyond! https://t.co/uEdb3FJjbd

It wouldn’t be The Weekly Download without some Friday Fun! Check out this hilarious video of Jimmy Fallon and Lin-Manuel Miranda singing holiday parodies of our favourite top 40 songs.

The search for a new Oscars host begins.
Here are the auditions. #SNL pic.twitter.com/zBPCmeFE13

On behalf of everyone here at Spodek & Co., we wish you a joyous holiday season filled with quality time spent with friends and family! See you in 2019!