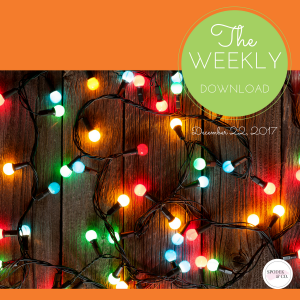 Wishing you all a very happy holiday and a chance to rest and recharge before the new year begins!

Here are some of the hot topics we’ve got on deck this week: a cake in support of an awesome cause, what Canadians searched for most this year, how a simple cooking tool built a fan following, plus – is social media doing us more harm than good?

Couple challenges bakers to make the “gayest cake they could”

In contrast to the gay wedding cake woes south of the border, a Canadian couple approached Cake and Loaf Bakery in Hamilton to make the “gayest cake” that they could possibly make in celebration of their one-year engagement anniversary.

Spoiler alert: the result did not disappoint!

In celebrating my engagement to Jared Lenover (It's been a year… 8 months 'till the big day!!) I wanted to get him a cake to celebrate (he loves cake…as do I!). So I called my local bakery, @cakeandloafbakery and requested the GAYEST cake they could make. Without hesitation, and with much excitement, they said "We'll do it!!!" This is what I got. I am in tears right now I'm so happy. Being part of the LGBTQ+ community isn't easy for many. And that's an huge understatement. But I am proud of who I am, and how fare WE have come. I am proud to be a gay Canadian who can order a cake and not get turned down because of who I love. I love this country, and I love my community. If you believe that #LoveIsLove, please share, and show our neighbours to the south that we support them. That we empathize with their struggles. That Canada is loud and proud and will make them any cake their heart desires. #gaypride #humanrights #lesbianpride #lgbtq #lgbtcommunity #lgbtq #lgbtplus #lgbtpride #lgbtsupport #lgbttextposts #loveislove #pansexual #pride #queer #trans #transgender #nonbinary #lesbian #polysexual #genderequality #Bisexual #TwoSpirited

In fact, the couple was so thrilled with the results, they’ve designed t-shirts using the cake design with sales benefitting LGBTQ charities.

Our talented friend + fellow #hamont small biz owner @chrispaulfarias created this “IT’S NOT ABOUT A CAKE” Tshirt, that’s about inclusion, human rights, + so much more. 🎂We created this exact rainbow unicorn cake celebrating Chris + Jared’s love ❤️ our cake decorator @quinnpallister ‘s creation spoken truly from the heart! 👉100% of profits from this shirt and all “it’s not about a cake” merchandise will go directly to LGBTQ+ positive charities in our city. 👉Go to our Facebook page – Cake and Loaf Bakery – for a direct link -https://www.teepublic.com/t-shirt/2186195-its-not-about-the-cake?

Is social media really good for us?

It’s a tough question we often ask ourselves – is social media really doing us more harm than good?
Turns out, Facebook had the same question. Last week, the social network posted a interesting blog post that details the positives and negatives to spending time on social media, and the results are pretty much what you’d expect.

Facebook says they’re working to make the platform more about engagement and social interaction and less about simply “spending time”. Improvements to help boost engagement include enhancing News Feed quality, a Snooze option (temporarily mute pages or people for 30 days), a Take a Break feature and more suicide prevention tools to connect those in distress with resources that can help.

So, what did Canadians Google most this year?

It’s about that time to reflect on the year that was — and that means rounding up the nation’s top searches for 2017. Google Canada’s 2017 Year in Review has some results we recognize, and some we’re definitely intrigued by.
Did any of your top queries make the list?

How one simple cooking tool spawned a cooking phenomenon

Chances are you’ve heard of an Instant Pot. The electric multicooker has become an internet phenomenon and even inspired a following of “Potheads” — dedicated foodies and home cooks who swear by it. It’s not uncommon to see reviews on how the Instant Pot has been “lifechanging” for many. In fact, it was listed as one of the top five items sold by retailers like Target and Amazon this year on Black Friday.

So how did word spread like wildfire about the Instant Pot?

After sluggish sales in Ontario, Robert Wang, creator of the Instant Pot, listed it on Amazon, where a community of food writers eventually took notice. Sensing viral potential, Instant Pot sent test units to about 200 influential chefs, cooking instructors and food bloggers. Reviews and recipes appeared online, and sales began to climb. While pressure cookers aren’t new, the technology behind the Instant Pot makes it stand out for its ability to prevent overheating or explosion.

To Wang, the key to the product’s viral success was Amazon. Above all else, the Instant Pot is a remarkable example of the lift that online influencers and word of mouth can provide with the right product and strategy in place. Something we at Spodek & Co. know quite well.

12 Days of Christmas: A Tradition of Holiday Gifts to PR Peeps from Gini Dietrich

Okay, some of us could go on all day with the value – both educational and networking – Gini Dietrich’s Spin Sucks community has created. She calls some of the members crazies but that’s for you to decide. In this year’s holiday series (check out all 12 posts for lots of treats for PR pros), Gini introduces her blog readers to 11 members of the PR Dream Team – a subscription-only extension of the Spin Sucks community on Slack – you should read about all 11 of them in 12 Days of Christmas: Eleven PR Dream Team Members. We were chuffed to see the story about how our rebrand came to be and the results…  Thanks Gini, Mwah! Xo

Fifty of the year’s top Tweets

Just like the search queries, another “top” list making the rounds online is all about Tweets.
Some of our faves:

Bad news: I accidentally washed a nice wool shirt that I really loved and it shrunk a LOT

I've been picking apples in the autumn since before it was cool to post about it on Instagram. pic.twitter.com/9hJLCwV6Fc