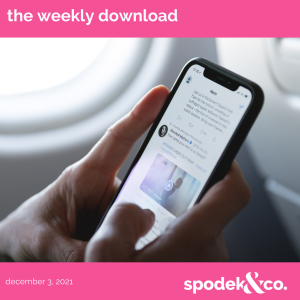 December is here and the countdown to the end of the year begins. In today’s edition of The Weekly Download: Twitter prevents users from sharing private information without consent; Facebook to add new trends insight in Creator Studio; Google adds 4 valuable updates in their Google Ads Performance Planner tool, plus some Friday Fun.

The latest update in Twitter’s Private Information Policy, demonstrates the company’s dedication to protect the privacy of its users’ private media. The update expands its policy to including photos and videos captured without a person’s consent.

As concerns grow over the misuse of private information in the digital sphere, Twitter will now take action on unauthorized private media.

“Sharing personal media, such as images or videos, can potentially violate a person’s privacy, and may lead to emotional or physical harm. The misuse of private media can affect everyone, but can have a disproportionate effect on women, activists, dissidents, and members of minority communities.”

In other Twitter news, company co-founder Jack Dorsey has stepped down from his role as CEO and former CTO Parag Agrawal has stepped into the position. With the announcement in a Tweet it seems the former CEO will be focusing on his role as CEO of Square, but will remain a member of the board until his term expires in 2022.

Former chief technology officer of Twitter, Parag Agrawal, at 37 years old, becomes the youngest CEO of a Fortune 500 company. How the change in management will affect Twitter remains to be seen, but we all have high hopes for a positive outcome.

Facebook has announced the impending rollout of a new “Inspiration Hub” element in Creator Studio. With this important analytical addition, Facebook has given the user the ability to focus on content and hashtag trends in related categories which could help further shape posting strategies.

Access to this information could be extremely helpful in knowing what is resonating with Facebook users, and who your target market is engaging with in the app.
The Hub also helps you tap into trending discussions by including insights into trending hashtags within your chosen timeframe.

It is still unclear when this new feature will be available to users, but we will keep you updated.

Google Ads Performance Planner tool has been updated. These latest updates allow you to run more campaigns at the same time, understand why Google is recommending changes, estimate secondary metrics that help you understand the impact of changes to your campaigns beyond key metrics, and adds the ability to choose a specific time range.

The update details are explained here.

Let’s celebrate the start of the holiday season with Mariah and friends.

And have a Kleenex ready for Steven Page and Ryan Reynolds.