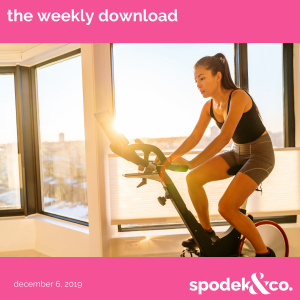 Happy Friday and welcome back to another installment of The Weekly Download!

Before we jump in, we want to take a minute to recall the events of December 6, 1989 at École Polytechnique. Thirty years ago today, the lives of 14 intelligent, vibrant women were taken. Today, we think of them and their loved ones.

Larry Page and Sergey Brin, co-founder of Google and Alphabet, announced this week that they would be stepping down from their roles as company top executives.

Sundar Pichai, Google’s CEO since 2015, will officially become Alphabet’s CEO following the departure of the original founders. Page and Brin, who will control a majority of parent company Alphabet’s most powerful shares, will remain on the company’s board.

I’m excited about Alphabet’s long term focus on tackling big challenges through technology. Thanks to Larry & Sergey, we have a timeless mission, enduring values and a culture of collaboration & exploration – a strong foundation we’ll continue to build on https://t.co/tSVsaj4FsR

The move isn’t all too surprising – in recent years, Pichai has become the public face of the organization.

Beloved internet celebrity cat Lil Bub has died, passing away peacefully in her sleep earlier this week at the age of eight years old.

Lil Bub achieved so much in her short life as one of the internet’s most famous felines. She helped raise over $700,000 for animals in need through partnerships with organizations like the ASPCA and was even part of a documentary called Lil Bub & Friendz.

Her owner, Mike Bridavsky, posted a sweet message following her passing: “I am forever honored and humbled that you chose me as your caretaker. Please visit all of us in our dreams often. GOOD JOB BUB.”

Peloton’s New Ad Divides the Internet and Leaves Many Confused

Peloton’s newest commercial for the holiday season has left many people feeling all kinds of emotions… and not good ones.

The ad followers a woman’s yearlong selfie journey after receiving a Peloton bike from her partner for the holidays.

Many have shared their thoughts regarding the ad on social media, criticizing the fact that the man seemed to be suggesting the woman should be working out more. Some even responded by creating their own parodies of the ad.

The company says they are “disappointed in how some have misinterpreted this commercial.”

Peloton’s shares fell more than 9% this week as a result of the backlash, erasing nearly $942 million from the company’s market value in a single day. Yikes!

What are your thoughts on the video?

It’s Here! Pantone’s Color of the Year Is…

Presenting PANTONE 19-4052 Classic Blue, the Pantone Color of the Year 2020. A timeless and enduring blue hue, timeless in its simplicity. #pantone2020 #coloroftheyear pic.twitter.com/L0qH6CohsC

According to Pantone, the colour is a timeless and enduring blue hue, suggestive of the sky at dusk. Classic Blue highlights “our desire for a dependable and stable foundation on which to build as we cross the threshold into a new era.”

It’s certainly a departure from some of the more fun and bright colours we’ve seen in recent years, like 2019’s Living Coral, 2018’s Ultra Violet, and 2016’s Rose Quartz.

What are your thoughts on Classic Blue?

In an effort to be more up front with users about the way their data is handled, Twitter has launched a new Privacy Center with that goal in mind.

According to the company, the initiative aims to provide more clarity around what’s being done to protect information users decide to share. The center is described as a central place that hosts everything that’s part of privacy and data protection work, including related initiatives, announcements, new privacy products and communication about security incidents.

Facebook is testing out yet another tool – this time, one that gives users the ability to move photos between Facebook and other platforms. The test is rolling out with support for Google Photos, with other platforms to follow.

The new tool is part of the Data Transfer Project – a joint initiative between Facebook, Twitter, Google and Microsoft to make data transfer easier between online services.

For those of us who have been on Facebook since its early days, it could be an extremely helpful feature to archive some of our favourite moments that were captured and stored on the platform.

Will you use the feature to transfer your photos?

This one’s for all you Alanis fans out there! Check out her performance of “You Oughta Know” in a New York City subway station… in disguise!