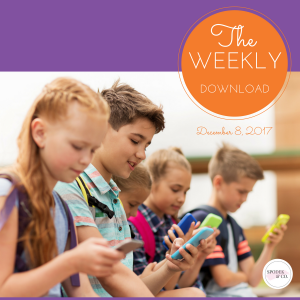 On the agenda today: Facebook’s new Messenger updates for kids and businesses, net neutrality in Canada, Reddit’s brand invasion, a piece of Canadian history, Google’s digital advent calendar, and setting the “tone” for 2018.

Facebook’s newest app is aimed at a younger audience – those 6 to 12, to be exact.

The other big differences? There are no ads or in-app purchases to comply with the Children’s Online Privacy and Protection Act. Messenger Kids is Facebook’s attempt to do what other big apps (Snapchat, Whatsapp and Twitter) haven’t done due to COPPA laws. While on the surface, the new app seems harmless, the underlying motive to start brand advocates – and Facebook usage early –  in children as young as six years old doesn’t go unnoticed.

For now, the app is currently in preview in the United States only with a limited rollout on iOS.

And on the topic of Facebook, Customer Chat is Facebook’s new Messenger-powered customer support tool which lets businesses talk with customers both on Facebook and on their website. The new tool is essentially a plugin that brings the Facebook Messenger experience to brand websites.

Customer Chat saves conversation histories, so a user can go from talking with a rep on a retailer’s website to conversing with them within the Messenger mobile app without restarting a new thread.

The downside to Customer Chat? Its success all depends on how users choose to engage, and they may not want to turn to Facebook Messenger to address their concerns.

This week it was discovered that threats of net neutrality have begun to spread to Canada.

Bell Media has reportedly submitted a proposal to the CRTC that outlines a plan to end net neutrality. According to the documents released by Canadaland, a coalition of companies will push for the development of a non-profit corporation to index and maintain a database of alleged pirate sites, then force all internet providers in the country to block access to them. This new corporation would be called the Internet Piracy Review Agency (IPRA).
The coalition is said to include some of Canada’s biggest media giants, including Cineplex and Rogers. It’s expected that the full list of companies involved will go public on December 19 when the application to the CRTC is finalized.
Parallels between the IPRA and the U.S.’s fight against American ISP giants for net neutrality can be drawn. The move could lead to a slippery slope that calls into question what constitutes piracy and what content truly deserves to be banned.

Disclaimer: I (Eden) DO support net neutrality and didn’t know this story was part of The Weekly Download until after it was written. I have a personal connection to Bell Media that has not influenced any of the content on this blog or website.

We’re fans of this choice! Just yesterday, Pantone announced that the 2018 colour of the year is Ultra Violet 18-3838.

According to Pantone, the colour is a dramatically thoughtful and provocative shade that communicates originality, ingenuity, and visionary thinking that points us toward the future.

How will you use the 2018 colour of the year in your personal and professional life? Pantone has lots of great ideas to help get you started.

Brands like McDonald’s and Marriott use Sprinklr to easily identify and respond to their customers. Using Sprinklr, these brands can listen to what customers are saying on platforms like Reddit and manage customer care directly through the platform.

Although it could be a helpful update, some Redditors are averse to the brand invasion. Reddit says that brand engagement on the platform is nothing new – Sprinklr will just help brands analyze trending topics and engage better than before.

On December 5, 1917, two ships carrying explosive cargo collided in Halifax Harbour and resulted in one of the most deadly disasters in Canadian history.

In remembrance of the 100 year anniversary, CBC News Interactives put together a 360° news interactive that recounts the events of that day. It’s definitely worth a watch!

This December, Google’s version of a digital advent calendar allows you to have fun every day leading up to Christmas. Learn how to code a snowflake or play mini games. It’s more addicting than you think!

It’s that time of year again… if you’re like some of us, you may revert to gift bags and boxes but if you’re a purist, let us know what you think of these hacks and if you have any of your own.