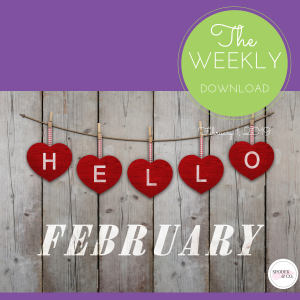 After what felt like the longest month ever… February is here! Time to kick off a new month with a new edition of The Weekly Download.

This is possibly one of the biggest pieces of digital marketing news we’ve seen floating around the Internet this week — and for good reason. In a major shuffle that breaks down barriers between three giant messaging apps, Facebook will reportedly merge Messenger, Instagram and WhatsApp chats.

While the apps themselves will remain separate on your home screen, common messaging features would be unified. For some users the merge is a welcome change, making it easy to jump between conversations and across platforms. Others aren’t so happy: privacy and encryption are key to WhatsApp, and a platform merge might put these at risk.

Sources say the merge won’t happen until 2020. Tell us — are you looking forward to the merge or would you rather keep these essential messaging apps separate?

Bad news for Apple this week. A major bug was discovered in iOS that allowed callers to hear and see the person on the other end before the call has been answered.

Here’s how it works: first, you call someone on FaceTime. Next, before they answer, swipe up and add yourself to the call. You can now hear through the person’s phone, all without them answering the call.

After many, many media reports about the bug, Apple disabled group FaceTime. An iOS update will be released to take care of the issue, but no firm news on when yet.

Word dropped this week that Facebook has been paying users to install a VPN called “Facebook Research” to help gather user data on phone and web activity. The VPN is a way for Facebook to sidestep the iOS App Store — Apple banned Facebook’s Onavo Protect app last June when it was found to be in violation of Apple policy.

According to TechCrunch, since 2016, Facebook has been paying users between the ages of 13 and 35 up to $20 per month (plus referral fees) to install the app for user research. Allowing access provides a peek at extensive personal data, including private messages in social media apps, instant messaging chats, emails, web searches, web browsing activity, and even ongoing location information. Facebook has even gone so far as to ask participants to screenshot their recent Amazon order history.

Further research by TechCrunch showed that Facebook used beta testing services to mask their involvement and also used social advertising on platforms like Instagram to entice teens to participate in the study with the promise of payment.

Although Facebook maintains that data was only collected when users opted in (and provided parental consent, in the case of those underage), the “spying” has left a bad taste in the mouths of many. The Facebook Research program has since been ceased on the iOS network. No word on Android yet.

Sorry, Canada: Our Mobile Phone Plans Are Among the Worst in the World

A new study of 39 countries shows that Canadians are getting the least amount of data for the most amount of money when it comes to mobile phone plans.

The study showed revenue per GB is approximately 70 times higher for telecoms in Canada than in India and 23 times higher than in Finland.

Another interesting finding? Mobile usage in Canada is lower than average, possibly due to the high costs.

Who Will Be the First Brand to Partner with the World Record Instagram Egg?

Word has it that viral marketing agency Jerry Media is working on a potential multi-million brand deal with an extremely famous client… The World Record Instagram Egg. Yup, you read that right.

If you happen to follow the World Record Egg, you may have noticed that something is about to bust out of its speckled shell. The race to monetize the egg is on, and ad strategists predict the deal will be huge. How’s that for strange news you never thought you’d be hearing in 2019?

The egg is a good egg, though, and is donating 10 percent of its merchandising (yes, merchandising) proceeds to YoungMinds, the National Alliance on Mental Illness, and the Campaign Against Living Miserably.

Whether you’re watching for the game or the half time show, an undeniably fun part of Super Bowl weekend is the commercials. Here are a couple favourites so far:

Check out EW’s running list of ads (plus teasers) as we count down to kickoff.

TTC Driver Goes Viral on Twitter for His Amazing Nails

Twitter user @kittybiddy shared a heartwarming story this week about a TTC driver with a super cool passion. Check out the story for yourself below, and follow @TTCNails for more amazingness on Instagram.