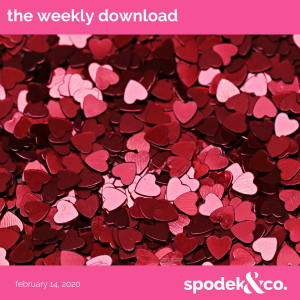 Happy Friday, and Happy Valentine’s Day! Whether you’re celebrating today or not, we’re serving up some weekly digital marketing news that’s sure to give you the warm fuzzies.

On the agenda: the future of IGTV monetization, the rejected Oscars ad making headlines, a viral broom trick “sweeping” the internet, how Canada is cracking down on influencer marketing, a rioting fanbase, the power of online influencers, and some special Valentine’s Day Friday Fun.

According to an article by TechCrunch, Instagram has internally prototyped an Instagram Partner Program that would let creators earn money by showing advertisements along with their IGTV videos. The new program might be a way to bring more high-quality content to the platform.

Like Facebook Watch, video creators could earn a cut of revenue “Ad Breaks” inserted into the middle of their content. There’s no word on what the revenue breakdown would be on IGTV, but Facebook Watch producers currently earn a 55 percent cut. It’s estimated that revenue on IGTV would be similar in order to keep up with other influencer revenue streams.

Women everywhere took to social media after learning ABC rejected an ad that shed light on the reality of postpartum.

Frida Mom, a brand selling all things baby and postpartum, created an ad about the very real and unglamorous side of childbirth. After submitting the ad to ABC to be played during the Oscars, the ad was deemed “too graphic with partial nudity and product demonstration.”

The ad you’re about to watch was rejected by ABC & the Oscars from airing during this year’s award show. It’s not “violent, political” or sexual in nature. Our ad is not “religious or lewd” and does not portray “guns or ammunition”. “Feminine hygiene & hemorrhoid relief” are also banned subjects.

It’s just a new mom, home with her baby and her new body for the first time. Yet it was rejected.

The news about the ad’s rejection led to an open (and angry) conversation online, even prompting comments from celebs like Busy Phillipps and Michelle Monaghan.

When asked about the ad and future campaigns, Frida Mom issued a statement saying, “While this rejection of our ad feels like a step back it certainly won’t deter us from amplifying our message through whatever channels remain available to us.”

It might be messy, but the ad is real, and we think it’s definitely a conversation worth having.

You’ve probably seen the latest trend “sweeping” the internet. People are taking pictures and videos of themselves making brooms stand up all by themselves.

The trick went viral after a Twitter user suggested NASA said Monday was the only day the “standing broom” trick would work because of the earth’s gravitational pull.

Okay so NASA said today was the only day a broom can stand up on its own because of the gravitational pull…I didn’t believe it at first but OMG! 😭😭😭😭😭 pic.twitter.com/M0HCeemyGt

While there was nothing to back up the claim, it didn’t stop social media from testing it out.

Pajama broom challenge 😂 What are you doing on a Monday Night?! #broomchallenge pic.twitter.com/1DU7q9bZp4

We hate to be the bearers of bad news, but NASA has since debunked the original Twitter user’s claim.

Astronaut Alvin Drew and scientist Sarah Noble respond to the #BroomstickChallenge, showing that basic physics works every day of the year — not just February 10th. pic.twitter.com/4TTbI3mvzd

But hey, it still makes for a fun party trick!

Canada Cracks Down on Influencer Marketing

As a reaction to the ever-growing influencer industry, the Canadian Competition Bureau recently announced steps to better regulate the growing industry and hold companies accountable for false representation.

The Bureau is mainly concerned with the spreading of misleading information (like unconfirmed scientific benefits) and the failure to disclose material information — both of which apply mostly to beauty products.

Influencers are currently required to disclose any “material connection” to brands and promoted posts by using specific hashtags like #ad or #sponsored at the beginning of captions for transparency. The Bureau has confirmed they will be enforcing these rules much more strictly, specifically in industries like health, beauty, fashion, technology and travel.

DevaCurl, a brand for curly hair founded in 1994, has created a cult following over the years its dedication to the care and styling of ringlets. But over the past five months, a group of influencers have taken to social media (particularly YouTube) to allege that the once-raved about brand is damaging their locks, leading to dandruff, frizz, and changes to their curl patterns.

Ayesha Malik, a curly hair YouTuber with almost 200,000 subscribers, made a video last month discussing her disappointment after using the brand’s products exclusively for years. Malik had previously recommended the brand to subscribers, sometimes in paid partnership with the company.

It doesn’t take much searching to see that dozens of other influencers and many consumers are speaking out against the company. Some have even reached out to followers asking them to file complaints with the FDA against DevaCurl.

While the complaints and comments have been happening for months now, DevaCurl has only just spoken out about the backlash. The brand issued a statement regarding the extensive testing and quality control of products and asked that customers share their experiences with them, noting they will “go above and beyond to help anyone on their curl journey.”

The story is still unfolding, but it’s a good example of the power of online influencers, and how brands should approach issues management in the online world.

Yup… You read that right! The San Antonio Zoo is putting a twist on Valentine’s Day this year by allowing people to name cockroaches in honour of their exes.

For just $5, zoo staff will feed the roach to an animal at the zoo’s “Cry Me a Cockroach” event.

And if cockroaches aren’t your thing, for an additional $20, you can make that roach a rat instead.

Not in the San Antonio area? No problem! You can watch the event go down on Facebook Live later today.

It’s no secret that Valentine’s Day looks a little different after you’re married.

In honour of the occasion, the Huffington Post rounded up some of the best married Valentine’s Day tweets, and we hope you’ll enjoy them as much as we did!

“What did you get her for Valentine’s Day?”

MARRIED GUY: we got a new garbage disposal last month

Wife and I agreed no Valentine's gifts for each other so of course I'll be shopping for her every day until then because this is obviously a trap.

I guess my wife is mad because she opened her Valentine's Day gifts out of order and the vacuum bags ruined the surprise of the vacuum.

My husband just "ran out for a quick errand" and I could tell by the panic in his eyes he just realized Valentine's Day is tomorrow.