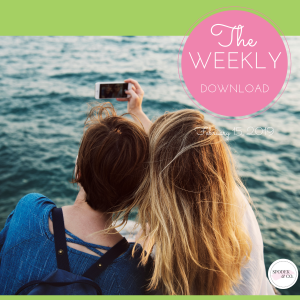 Hooray for Friday! Here’s what you might have missed this week: Toronto’s infamous #ChairGirl and unprecedented social media shaming, the launch of LinkedIn Live, Calgary Police’s funny Valentines and Facebook’s possible multibillion-dollar fine. Plus, could an “edit” feature of sorts be coming for Twitter?

This week, LinkedIn launched LinkedIn Live, a medium allowing people and organizations to broadcast real-time video to select groups, or to the platform at large.

According to LinkedIn, video content is growing faster than ever on the platform, so it’s no surprise that they’re taking the next step when it comes to video content. The opportunities are endless: think conferences, Q&As, product announcements, award ceremonies and so much more.

LinkedIn Live is invite-only and being beta tested in the U.S. market only for now. It’s not clear when the ability to stream on LinkedIn Live will be available to everyone, but a contact form will be coming in the next few weeks so users can request access to the new feature.

If you were on social media at all this week, you probably saw that video of Toronto’s #ChairGirl — and it went viral for all the wrong reasons.

Nineteen year-old Marcella Zoia is out on bail and facing three criminal charges of mischief. But she’s already been convicted in the eyes of the thousands who viewed the disturbing video of her throwing a chair from a Toronto high-rise balcony. On top of the charges, Zoia has been publicly blasted for a stunt that at best could have caused a serious accident and at worst could have killed someone! And her bad choice will last forever online.

The incident is an example of the new level of reach and power social media has given shaming. According to Toronto criminal defence lawyer Daniel Brown, judges can actually take into account “public notoriety” as a “mitigating factor” when sentencing cases that have garnered extreme negative attention.

The #ChairGirl video is also an example of the false sense of security apps like Snapchat and Instagram provide; but the truth is that videos, pictures and text content are available for all to see, including friends, family, potential employers, lawyers and police.

The Federal Trade Commission is negotiating with the social network to settle the issue of potential privacy violations with a fine. While no exact figure has been released, talks of a “multibillion-dollar’ fine would be the FTC’s largest fine ever against a tech company.

The FTC has been investigating Facebook’s privacy practices since March 2018, following the Cambridge Analytica privacy scandal. To recap, the scandal called Facebook’s data collection practices into question and raised some serious concerns about user privacy.

While a fine set in the billions seems steep, for a company that brought in almost $56 billion in revenue in 2018, we’re pretty sure Facebook can afford it.

We’ve all been wishing Twitter would get with the program and add an “edit’ feature already! Well, the wait is over! Maybe. Sort of.

CEO Jack Dorsey said the company is thinking about a “clarification” feature to include additional context for tweets as a way to help people feel more comfortable about what they broadcast to the world.

Dorsey says the feature would function similarly to a retweet with comment. If the user had opted to “clarify” a tweet, that original tweet would always been displayed with the subsequent clarification. Which would you prefer? An option to clarify? Or a simple edit function?

To celebrate the special day of love and togetherness, they shared some special messages for a few people they’ve been wanting to spend a little time with… Check out some of our favourites below.

Hey, Joe. Not to be risqué, but there’s something we gotta say!

If you have any info on Joe, please contact us at 403-266-1234, or @StopCrimeYYC. #BeOurs #ValentinesDay #yyc pic.twitter.com/HWTPsppHkm