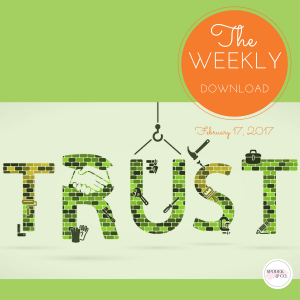 After another big snowfall this week, I think the silver lining on the February clouds has to be Family Day…and the fact that this month only has 28 days. I don’t know about you, but after all the shovelling I did and injuring my back as a result last weekend I’m so ready for March to hit. Spring is coming! As Family Day is still a relatively newer statutory holiday here in Ontario (and most Canadian provinces), many families are just starting to develop traditions to celebrate. I’m personally looking forward to welcoming my sons home from university for reading week piggy backed on to the extended weekend. Whatever your plans may be, why not kick them off with these hot topics from the past week…?

Edelman Trust Barometer 2017: “…trust is in crisis around the world”

Edelman released their annual trust barometer this week and the findings are somewhat distressing. Public distrust in our institutions has grown, and done so at a staggering pace in Canada as populism is growing. According to Edelman, “To rebuild trust and restore faith in the system, institutions must step outside of their traditional roles and work toward a new, more integrated operating model that puts people — and the addressing of their fears — at the center of everything they do.”

Snapchat setting its sights on GenX and beyond

Nothing says “we need to reach a broader audience” more than an IPO. As Snap Inc. prepares for its planned stock market debut in March, they’ve set their eyes on luring users older than 35. Currently their biggest market is 18- to 24-year-olds, an age group that is often attracted to the next big thing in social media and less likely to respond to social advertising. I’ll be the first to admit that I haven’t embraced Snapchat to the same extent as my other social media platforms. Yet I do see the value in it for brands to reach a certain target. For all of you out there wise of 35, tell me, are you on Snapchat?
With so many recent negative stories and trolling taking place on social media, hearing positive ones are a breath of fresh air. This week there are two I wanted to share with you.

Reed Botwright appealed to people of Instagram and other social media platforms to search for Star Wars Kraft Dinner, the food of choice for his six-year-old autistic son, Everett. And, look who replied none other than William Shatner aka Captain Kirk himself. He asked Kraft Foods to help and they came through, in addition to many others who will now be providing the Botwright family with a lifetime supply of Star Wars KD (or Kraft Dinner) the yummy cheesy pasta in a box.

@kraftfoods can you possibly help?👇🏻 Even if you still have just the shaped macaroni they can use current product for cheese sauce. https://t.co/4ScDn9Rpe1

Thanks everyone for your support! We have enough for a lifetime supply of Everett’s KD!!!https://t.co/0Cj7jfZs5g cc @kraft @WilliamShatner

Want to score with your competition’s customers? Try pizza

Everyone knows airline competition is fierce, especially in Canada where there are only two airlines offering flights from coast to coast. Last week, an Air Canada flight on route to St. John’s from Toronto had to make an unexpected overnight stop in Fredricton due to bad weather. It was late at night, passengers were hungry and there was nowhere to get food at the airport rendering the $10 food vouchers an Air Canada representative gave them useless. What happened next? A WestJet pilot stepped in…

…and ordered them pizza…

…winning over their bellies and in at least some cases, their business. At the end of the day, it boils down to doing things differently and putting customers first and foremost with everything you do.

From Adele’s redemption right off the top of the show, to Beyonce’s epic (albeit, somewhat indulgent) performance, everything was coming up gold at the Grammy’s last Sunday—including this fashion disaster from CeeLo Green which quickly became the latest meme mania. My personal fave: Facts vs. Alternative Facts.

Since his starring roles in The Night Of and Rogue One, seems like Riz Ahmed is everywhere these days and deservedly so. Did you catch him on the final season premiere of Girls? If you missed it, here’s a taste of his other side as Riz MC.

All kinds of politically motivated boycotts going on this week are being driven over social media. From the #BAYcott over Ivanka Trump’s fashion line to Starbucks because the CEO said he was going to hire refugees. Political messages are all the rage in digital, just take a look at the open letter from the Canadian Tech Community about diversity being our strength. Malala is (not surprisingly) against the U.S. refugee ban, and we talk about a new social network called Heartmob that seeks to end online harassment. And maybe our favourite positive response to Trump this week: women responding online (with photos) to his demand that female staff dress like women.