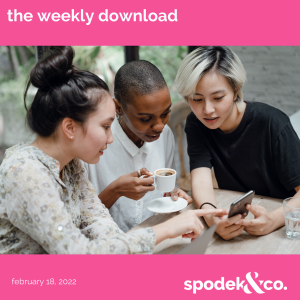 It’s Friday! We’re back with your favourite digital news roundup.

This week on The Weekly Download: Google announces plans to revamp tracking for Android devices, TikTok bans deadnaming and misgendering, Instagram rolls out a new “Likes” feature for Stories, and Twitter helps identify #GoodBot accounts and adds a new “pin” feature to user inboxes. Plus some Friday Fun!

Following in Apple’s footsteps, Google is planning changes to Android devices in a move to improve privacy and limit third-party data sharing and selling by replacing its current ID system. Google says it will work with app developers and digital advertisers to find a balance between maintaining user privacy and generating ad revenue, particularly in light of the recent stock decline of Meta, Facebook’s owner, after approximately 75% of Apple users opted out of its tracking system.

In an important effort to protect its LGBTQ+ community, TikTok has expanded its Community Guidelines. The new policies ban any content that includes misogyny, deadnaming, or misgendering, in addition to explicitly prohibiting anything that “supports or promotes conversion therapy programs.”

As explained by TikTok: “Though these ideologies have long been prohibited on TikTok, we’ve heard from creators and civil society organizations that it’s important to be explicit in our Community Guidelines. On top of this, we hope our recent feature enabling people to add their pronouns will encourage respectful and inclusive dialogue on our platform.”

We can continue to expect updates to TikTok’s Community Guidelines as the company works to make the app a safer space for all users.

Rather than sending reactions to your friends’ Stories, Instagram has started rolling out a new feature allowing you to “like” them instead.

Starting to roll out today, you can now send some love by liking people’s stories without sending a DM.

Likes on stories are private and do not have counts. Rather, they appear as hearts next to people’s handles in your Stories view sheet. 🙏🏼 pic.twitter.com/l56Rmzgnnw

This feature aims to clean up user inboxes by showing a heart beside user handles on the Stories sheet rather than creating a chat message for icon responses. Likes on Stories will remain private, as reactions currently do.

We’re interested to see how this will impact user engagement and the algorithm.

We’re launching labels for developer-created accounts so you can identify more of the good bots and their helpful Tweets. https://t.co/of6zFkck4n pic.twitter.com/1K9tBYEpOR

As explained by Twitter: “#GoodBots help people stay apprised of useful, entertaining, and relevant information from fun emoji mashups to breaking news. The label will give people on Twitter additional information about the bot and its purpose to help them decide which accounts to follow, engage with, and trust.”

Yesterday, Twitter rolled out a new feature that will allow users to pin up to six chats at the top of their inbox.

Keep your fave DM convos easily accessible by pinning them! You can now pin up to six conversations that will stay at the top of your DM inbox.

This feature will help users keep their most important conversations top of mind while using the app, even as they receive new direct messages. This can serve a special purpose for brands that are dealing with customer service inquiries, making them easy to locate. According to Social Media Today: “While 73% of Twitter users are likely to tweet at a brand to get a response, 52% are more likely to DM a brand account when it comes to more private info.”

Will this new feature make it easier for you to stay on top of your inbox?

In case you missed it, Super Bowl LVI was a millennial’s dream.