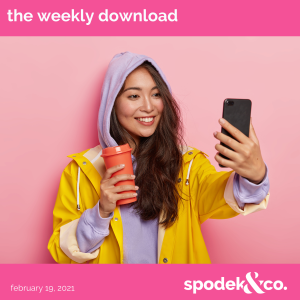 Yesterday Facebook announced it would ban users in Australia from sharing or reading news articles on its site in a move against a proposal that would force the social network to pay media for profiting off its content.

The proposed law, called the news media bargaining code, was unveiled just a day prior to Facebook’s announcement. According to the Huffington Post, the provision would force search engines and social media companies to pay media outlets for using their content – an unprecedented move that could finally give news media publications a piece of the digital advertising pie.

Facebook says that while the way Australians share news is changing, services that allow users to stay connected to friends, family, businesses and community will not change.

If you’re looking for more information on how to reach and engage with Gen Z on platforms like Snapchat, you’re in luck!

Yesterday, Snapchat released a new 60-page report for marketers compiled using responses from over 27,000 daily Snapchat users. The “Snapchat Report” provides a range of insights into the ever-evolving behaviour and habits of Gen Z users across the app.

Some of the report’s key findings:

Although the report focuses on Snapchat alone, marketers should pay attention to the findings of the report – namely the content types and themes being consumed – if they want to reach Gen Z on other channels, too.

In bizarre news this week, Canadian social media accounts spreading anti-mask information and conspiracy theories to children through Disney princesses have been shuttered.

The Huffington Post says that the operator of the “Freedom Princess” Facebook and Instagram accounts will be taking a break for the “foreseeable future.” The shutdown follows a report from Vice World News linking the accounts’ involvement to the anti-mask movement.

Prior to shut down, the accounts regularly shared photos and videos of Ottawa-based owner, Mary-Jean Harris, encouraging kids to disobey public health guidelines while dressed as popular Disney princess characters. The welcome post on the Freedom Princess Instagram page said it was a “place for children to interact with their favourite characters and learn about the government’s restrictions of our freedoms that threaten the prosperity of our lives in a fun way.”

Facebook will now add labels to posts related to climate change as part of its ongoing effort to put a stop to misinformation continually spreading across its platform.

The label, which will be added to “some posts on climate change,” will direct people to Facebook’s Climate Science Information Centre which launched in September of 2020. The dedicated Page offers important information regarding climate change in the same format as Facebook’s COVID-19 Info Center.

The new initiative will roll out in the UK first with plans to expand to other countries.

Cute Wallaby Makes a Surprise Visit to an Australian Hospital

Try not to smile at this cute wallaby who wandered into an emergency department in Australia earlier this week.