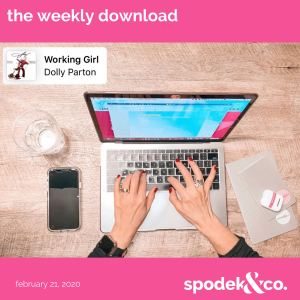 Welcome back to The Weekly Download. We’ve got a full agenda for you today, so let’s get to it!

Larry Tesler, Creator Behind ‘Copy’ and ‘Paste’, Dies at Age 74

Does a day ever go by where you don’t use handy keyboard shortcuts like “cut,” “copy,” and “paste?”

These worldwide computer concepts were pioneered by computer scientist Larry Tesler, who sadly passed away this week at the age of 74.

The inventor of cut/copy & paste, find & replace, and more was former Xerox researcher Larry Tesler. Your workday is easier thanks to his revolutionary ideas. Larry passed away Monday, so please join us in celebrating him. Photo credit: Yahoo CC-By-2.0 https://t.co/MXijSIMgoA pic.twitter.com/kXfLFuOlon

Also responsible for the genius of the “search” and “replace” functions, Tesler played an early, central role in making computers more accessible. Our world has been forever changed by his genius.

Facebook is Experimenting with a Pinterest-like App Called Hobbi

Hobbi is Facebook’s newest experiment — it’s an app that’s quite similar to Pinterest and launched under the radar to test user feedback.

Hobbi is marketed as a “one stop app for your personal projects” and allows users to organize photos of projects and activities via visual highlights… Exactly like Pinterest.

The app is built by Facebook’s NPE Team — a consumer-focused app group based on “shipping entirely new experiences.”

The app currently has a low rating of 2.1 in the app store with the main complaint being unoriginality.

Will you try Hobbi?

Instagram Users in Canada Can Finally Use Music Clips in Stories

Are you a big fan of Instagram Stories? Then you probably already heard the exciting news this week about music clips in story posts within the Canadian market!

After almost two years since the feature was originally rolled out in the U.S. and European markets, the feature has finally arrived in Canada. In the past, whenever an international user posted a music sample on an Instagram story, it would be muted for Canadian viewers.

According to Facebook, the Canadian rollout is the result of new licensing agreements over rights with Canadian music publishing societies and organizations.

Other new widgets are “music stickers” — visual icons that can be tapped to activate songs on Instagram Stories.

Have you tried the new feature yet? Drop your thoughts in the comments below!

Good news for Apple users out there — if you still rely on Microsoft Office as part of your workflow, the brand new version of the app is now available for download.

And yes, it has dark mode!

The app combines Word, Excel and Powerpoint into a single application for ease of use. Another plus: one streamlined app requires less phone storage and additional functionality when it comes to converting documents to additional file formats.

Snapchat is the newest social media application to invest in mental health resources for its users. Announced this week in honor of Safer Internet Day, Snapchat will serve up original content from “local experts” when key terms related to mental health (like
“anxiety” or “bullying”) are typed into the app’s search bar.

The new feature is called “Here For You” and its goal is to provide proactive resources within the app for those “who may be experiencing a mental health or emotional crisis.” Mental health content will appear on the results page in the format of 10-second clips that users can tap through, much like traditional Snap stories.

There’s no word yet on how effective the new program will be, but we’re glad to see a growing trend amongst social media companies when it comes to the health and wellbeing of their user base.

“Here For You” is expected to roll out over the next few months.

It’s not exactly appetizing, but the key messaging behind Burger King’s newest ad is one we can get behind.

The burger chain posted a video earlier this week of a Whopper decomposing and growing moldy over a period of 34 days.

The new stunt is part of a larger initiative to bring awareness to the company’s move away from preservatives and artificial flavors, and it’s certainly gotten the internet talking.

But tell us: are you really in the mood for a burger now? :/

Have you seen “Parasite” yet? Our team loved the film, and apparently, so did the Academy.

Child actor Jung Hyeon-jun, who played Park Da-song, couldn’t attend the Oscars earlier this month, but his family captured his reaction to the film’s historic Best Picture win at home.

Check out the video below for all the feels:

PARASITE PARTY: 10-year-old #Parasite #기생충 star Jung Hyeon-jun might have been too young to go to the #Oscars – but he still enjoyed the excitement of the best picture win. #AcademyAwards pic.twitter.com/sbn71fJ44z

Brody is four years old, but he already has talent beyond his years. This cutie pie is making headlines across the internet for his infectious personality and serious skill when it comes to dance and feeling the music.

Watch out @tiktok Boss Baby just got an account and his siblings are in charge! Link in bio! Do you guys like this app? Also, who should he follow that dances? Comment below and tag your favorite TIkTok folks. #boysdancetoo #tinydancer #dancersofinstagram #tiktok #balletboys #babyfosse song by @bag_raiders 🎶 pajamas by @disney @disneyjunior