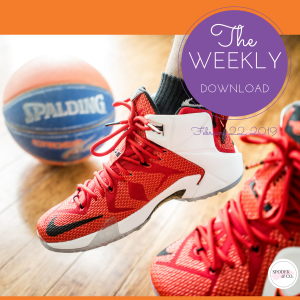 It’s Friday! Let’s celebrate with another installment of The Weekly Download, shall we?
On the agenda today, YouTube has updated its community guidelines, Instagram’s testing a new “giving” feature, and Nike made headlines this week for allllll the wrong reasons!
Plus, for Friday Fun we’re talking about a very Canadian twist on a classic work of art that you won’t want to miss!

For the first time in nearly a decade, YouTube is making some serious changes to its community guidelines. One of the biggest changes is how they will issue warnings to channels that break the rules.
Starting on February 25th, YouTube will begin issuing a new warning strike after a channel’s first rule violation. That first black mark will result in a “one-time warning” with no penalty (except for offending content being removed).
Following the one-time warning, YouTube’s existing three-strike system kicks in. As the current guidelines operate, subsequent strikes come with stricter penalties, but they’ll reset if a channel doesn’t break the rules for 90 days. The new warning strike is a one-time deal that will not reset.
Here are the penalties users will face under the new guidelines:

YouTube hopes that the change in their guidelines means that everyone will take the time to learn and review said policies. Or else.

Instagram is reportedly testing a new sticker in Stories that will allow users to start fundraisers for their favourite nonprofits.
Spotted by app researcher Jane Manchun Wong, the feature seems similar to Facebook’s fundraising and donation tools. It appears that users will be able to search through a list of nonprofits to link directly to the sticker.

In somewhat strange news, a ripped shoe has been the focus of the college basketball world (and the internet) following a match-up between Duke and North Carolina this past Wednesday. A blown-out Nike high-top resulted in injury for Zion Williamson, a projected first overall pick in this year’s NBA draft.

Many were flabbergasted by how the massive blow-out could have happened — the sole completely torn off from the rest of the shoe.
Nike has since apologized and is said to be investigating the incident. It’s not great news for a brand that prides themselves on high quality gear for athletes. To be continued…

Canadian Man Recreates the Mona Lisa on Backyard Ice Rink
Yup, you read that headline right! A Toronto man has recreated Leonardo da Vinci’s famous Mona Lisa on his very own backyard rink.
The making of the Snowna Lisa — as it has been so aptly named — is so cool (see what we did there?). Check it out for yourself below!