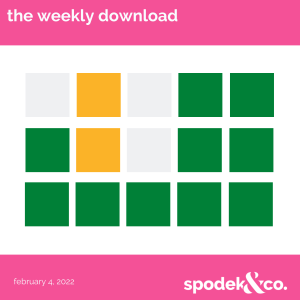 Happy Friday and welcome to your favourite digital news update, The Weekly Download. Join us as we discuss: Apple announcing it will be hosting unlisted apps, The New York Times buying Wordle, Instagram adding an option to convert Stories highlights to Reels, and TikTok announcing initiatives for Black History Month — plus some Friday Fun!

Apple has announced that it will now be hosting unlisted apps in its App Store.

Unlisted apps cannot be found within search, categories, charts, or any other directories typically used by App Store users. This allows developers to privately share their apps using a direct link, so their software isn’t distributed for public use.

As explained by Apple: “Apps for specific organizations, special events, or research studies, or apps used as employee resources or sales tools are good candidates for unlisted distribution.”

Still, developers have to apply to have their software on the platform for downloading, and anyone with access to the link will be able to install it.

The New York Times announced on Monday that it has bought the online word puzzle game Wordle. If you’re not familiar, you may have seen the green and yellow block game popping up on your Facebook feed over the last few weeks.

Software engineer Josh Wardle originally created the game for himself and family members to enjoy — and after some encouragement, he put the game online. The five-letter, six-attempt game blew up overnight and now has more than 300,000 daily players.

As shared by Wardle on Twitter: “I’m incredibly pleased to announce that I’ve reached an agreement with The New York Times for them to take over running Wordle going forward… I’ve long admired the NYT’s approach to their games and the respect with which they treat their players. Their values aligned with mine on these matters and I’m thrilled that they will be stewards of the game moving forward.”

An update on Wordle pic.twitter.com/TmHd0AIRLX

Instagram is fighting to win over users with its frequent video updates to match the success of its competitor, TikTok.

Its newest feature, to help encourage the use of Reels, allows users to convert their Stories highlights into Reels. When viewing highlights, users will see a Reels option that will allow them to convert their highlight sequence into a Reel and can also sync the content to music.

As explained by Social Media Today: “There would be some value to this, as another means to recycle your best posts, and boost your overall Instagram engagement. But the real impetus seems to be to get more people posting more Reels, which would then give Instagram more clips for the Reels pipeline, to help boost user engagement, while also ushering in more Reels creators. And if you generate a lot of engagement, you’ll no doubt post more Reels, and see more engagement — till eventually the very concept of TikTok will be a distant, fuzzy memory.”

All things considered, the two platforms just aren’t comparable, as users continue to use each platform for different types of media consumption.

February is Black History Month, and TikTok has announced #BlackTikTok events to showcase its Black creators.

As explained by TikTok: “We’re celebrating and honoring #BlackTikTok all month and beyond, with a billboard takeover of the Pendry West Hollywood, new in-app stickers, Black music playlists and TikTok LIVE programming that spotlights Black creators making waves on and off the platform.”

The livestreams will highlight Black creators, musicians, businesses, and organizations. TikTok is also collaborating with iHeartRadio for a live music event that will feature artists such as Lizzo and Big Sean and other artists who can be found using the hashtag #BlackMusic.

Be sure to check out online Black History Month events from Meta and Pinterest, too.

since the muffin is making the rounds again, here’s the full original video!