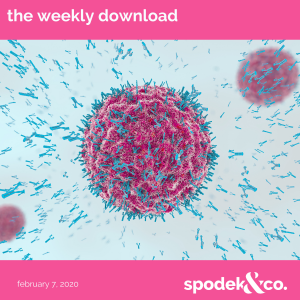 Welcome back to another edition of The Weekly Download!

To wrap things up, we’ll be sending you on your way with some Friday Fun to start your weekend right!

Looking to streamline your Instagram feed? The app has a solution for that. Instagram will now show who you interact with least frequently in case you want to unfollow them.

This week the company launched ‘following categories’ that divides the list of who you follow into groups including “most seen in feed” and “least interacted with”.

To access the feature, go to your profile, then “following” and you’ll see the categories you can explore. You can also sort who you follow by earliest to latest and vice versa in case you want to clear out your earliest follows or make sure you actually care about the latest people you followed.

The update is yet another feature from Instagram to make the user experience more positive.

Instagram is facing scrutiny once again for the promotion of anti-vax information on the platform.

It’s been almost a year since the company pledged to do better in the fight against misinformation, but the app is still rife with vaccine-related misinformation, according to an article by HuffPost.

With over 1 billion users and the ability to influence public discourse, Instagram has become a breeding ground for fake news, including public health hoaxes and conspiracy theories.

A simple search for “vaccines” on the app leads to both a number of accounts that are explicitly anti-vax, as well as accounts that seem to be vaccine-neutral but promote anti-vax information — many of these “promoted” by Instagram as “accounts you might like”.

Instagram moderates search results for different keywords and hashtags and works to derank content that it deems “inappropriate” — but there’s no word yet from Instagram on when anti-vax information will fall under that category.

After people shared mixed feelings following the death of Planters’ Mr. Peanut, the brand’s marketing department brought him back… As Baby Nut.

Planters debuted Baby Nut on Sunday in a Super Bowl ad showing Mr. Peanut’s funeral. As friends and family gather to pay respect to the late Mr. Peanut, a tear drops from Kool-Aid Man and falls to the ground. New growth springs from the ground and Baby Nut is born (no, we’re not joking):

Hello world, I’m happy to be back! I can’t believe everyone came together for little old me! #BabyNut pic.twitter.com/8DpCFjZzX3

It didn’t take long for the brand to celebrate the birth of its new mascot:

It takes a village to raise a peanut. #BabyNut pic.twitter.com/kEHSPjeIv5

So, how do we all feel about Baby Nut? Fun brand move, or a little… nutty? (We couldn’t help ourselves!)

Man Pretends to Have Coronavirus for Social Media “Fame”

A 28 year-old man from Thornhill was the centre of online controversy earlier this week when he declared he had coronavirus during a flight from Toronto to Jamaica.

The flight was forced to turn back to Toronto as per infectious disease protocol, derailing vacation plans for the 243 people on board. Two additional flights had to be cancelled due to the event.

When asked by a reporter about the incident, the man matter-of-factly shared he was just looking to “get a viral video.”

A flight from Toronto to Jamaica was forced to turn back Monday after a passenger made an “unfounded claim regarding coronavirus.” The passenger, James Potok, told Global News that he was looking to “get a viral video.”

Apparently the antics come with a catch: criminal charges.

For the first time ever, Twitter pulled in $1 billion in quarterly revenue, beating expectations following the company’s efforts to make the platform more user-friendly.

There’s been a bit of a change in recent years in terms of how the platform is used — what used to be about engagement and community has become more about breaking news and quick dissemination of other key information. But the latest figures show that the company isn’t going anywhere.

We’re looking forward to seeing what other changes Twitter makes in the quest for user-friendliness and how it affects the platform’s popularity.

And speaking of new company records, LinkedIn reached a new important milestone of 675 million members with “record levels of engagement” across the globe.

It’s no secret that the platform continues to be an important tool for professionals and businesses alike. According to the company, someone is hired on LinkedIn every seven seconds.

If you’re not regularly active on the platform, there’s never been a better time to revamp your Company Page or personal profile — and we can help!

For the third year in a row, Cristi Smith-Jones and her eight-year-old daughter have teamed up to recreate photos of iconic black women in honour of Black History Month.

Day 2 of #BlackHistoryMonth is dedicated to #MamieSmith, the 1st Black artist to record a vocal blues recording. She opened doors for other blues artists to record and gain popularity. She also acted, and her recording "Crazy Blues" is in the Grammy HOF and preserved in the LOC. pic.twitter.com/yewl6KKYcu

According to Cristi, the duo decided to take one photo per day and narrowed the extensive list to 29 memorable figures. Not only did her daughter have so much fun picking out costumes and dressing up, she also learned about important black women throughout history.

We love this idea and all it stands for!

And yes, we’re still talking about that halftime show — can you blame us?

Jennifer Lopez and Shakira were the first Latin artists to co-headline one of the year’s most-watched annual events, and the first pair of female artists to share top billing.

If you missed the incredible performance, you can check it out below.