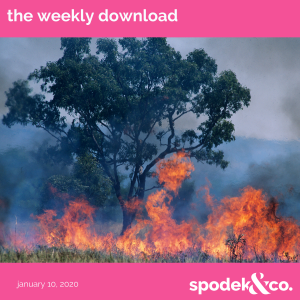 It’s Friday! Welcome back to another edition of The Weekly Download.

We want to start by offering our condolences to all those affected by tragedy this week. Our hearts go out to the families and friends of those aboard PS752, and all of those suffering in the wake of the Australian bushfires.

On the news desk today: the best of CES 2020, new features coming to Twitter, how a seemingly anonymous tweet left one Canadian man unemployed, the opportunistic social exploitation behind Australia’s deadly bushfires, and the revolutionary royal announcement creating buzz around the world.

CES 2020 is wrapping up today in Las Vegas, and there’s been no shortage in coverage of the event and new tech being unveiled. Behind on your updates? We’ve got you covered!

Wired shared their top 11 products from CES 2020, focusing on those that demonstrate strong sense of innovation and vision through “exquisite industrial design and innovative engineering”. We can’t wait to see how OrCam Hear might change the world.

Other exciting updates include new ways Google Assistant will make our lives a little easier.

And speaking of CES 2020, Twitter unveiled their newest functionality in a presentation at the conference earlier this week.

The company demonstrated a process in development that would enable Twitter users to define the audience for each of their tweets, direct from the composer window.

There’s a lot of potential uses for the new tool – particularly when considering customer service/live chats via tweet. As identified by Social Media Today, if you were to limit the respondents to only those who were tagged in the discussion, Twitter would be able to facilitate interview-style discussions, which could be great for hosting live chats, or even major celebrity interviews, which are often flooded with spam on dedicated hashtags.

What are your thoughts on the proposed changes?

If you haven’t heard this news yet, where have you been?!

On Wednesday, the Duke and Duchess of Sussex, Harry and Meghan, took to Instagram to announce their intention to “step back as ‘senior’ members of the Royal Family and work to become financially independent, while continuing to fully support Her Majesty The Queen.”

“After many months of reflection and internal discussions, we have chosen to make a transition this year in starting to carve out a progressive new role within this institution. We intend to step back as ‘senior’ members of the Royal Family and work to become financially independent, while continuing to fully support Her Majesty The Queen. It is with your encouragement, particularly over the last few years, that we feel prepared to make this adjustment. We now plan to balance our time between the United Kingdom and North America, continuing to honour our duty to The Queen, the Commonwealth, and our patronages. This geographic balance will enable us to raise our son with an appreciation for the royal tradition into which he was born, while also providing our family with the space to focus on the next chapter, including the launch of our new charitable entity. We look forward to sharing the full details of this exciting next step in due course, as we continue to collaborate with Her Majesty The Queen, The Prince of Wales, The Duke of Cambridge and all relevant parties. Until then, please accept our deepest thanks for your continued support.” – The Duke and Duchess of Sussex For more information, please visit sussexroyal.com (link in bio) Image © PA

The lengthy post came as a shock to some, but understandable to many amidst the intense scrutiny the couple has been subjected to, mostly at the hands of the British media.

According to reports, Harry and Meghan did not consult with either the Queen or the Prince of Wales before publishing the statement.

People have shared their predictions on where the family of three will end up as part of their new journey, with many placing bets on Canada. And, in an effort to get in on the trending topic, Tim Hortons cheekily offered the Sussexes “free coffee for life” if they decide to call Canada home.

No pressure, Meghan and Harry, but if you do choose to move to Canada, free coffee for life. Think about it.

Unfortunately, the tweet backfired in epic fashion, with users calling out the Canadian coffee chain to pay their employees fair wages:

They can afford to buy the company. Your employees can't afford rent.

Um….You have employees who have to go to the food bank to put food on the table and you want to offer an already incredibly wealthy family this perk.

How about you tell that franchise in Manitoba to give YOUR employees the 10 cents/hr they want and deserve? #TimHortons

The bushfire crisis in Australia has led to the senseless deaths of dozens of people, billions of animals, and the destruction of hundreds of homes and millions of acres of land. In the midst of all this devastation, some Instagram users are horrifically focused on other figures: dollars and likes.

A number of scam accounts have falsely claimed to be affiliated with legitimate aid organizations like National Geographic, making empty promises regarding donations with posts such as “1 like = $1 donation” in the hopes of account growth.

According to the Huffington Post, some accounts have even promoted personal PayPal accounts, urging their tens or hundreds of thousands of followers to donate to them directly while vowing to give those funds to charity later on.

Despite Instagram’s policies against deceptive activity, without proactive enforcement of anonymous scammers on the app, bad actors will continue to make opportunistic and fraudulent moves.

Fastenal CEO Dan Florness admits that the firing of an employee over his complaints on Twitter about receiving a $6 bottle of barbecue sauce as a holiday gift may have been an overreaction, but maintains it was completely legal.

After 27 year-old Hussien Mehaidli from Burnaby, B.C. received a bottle of barbecue sauce and a wooden scraper for the holidays, he tweeted his outrage at the company via an anonymous account. It wasn’t long before his story made headlines following his dismissal from the company as a result of his complaint.

According to Florness, the company’s reaction followed the law. Mehaidli has since hired a lawyer and plans on filing a wrongful dismissal claim. He said he wasn’t offered any severance after his termination, and believes he is entitled to that pay.

It’s a cautionary tale to those who are thinking of posting their every thought or grievance online – even if you believe you’re doing so anonymously.

Tiffany Haddish is kicking it up in high gear on Instagram to drum up excitement for her newest film, Lady Boss, which launches in theatres this weekend.

Keep an eye on her posts and stories this weekend if you’re looking for a laugh or two!

Will you be adding Lady Boss to your to-do list this weekend?