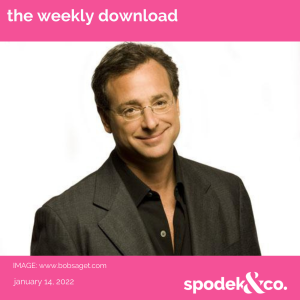 Happy Friday! Welcome to the latest installment of The Weekly Download.

The Skimm, an American  digital media company, asked its readers to share how their workplace has supported them (or pushed back) when they’ve chosen to put their family before their job. Unlike in Canada where we’reentitled to approximately 18-months family leave for new parents (a portion of that paid by the government, while employers have the option to contribute), families – particularly in the U.S. –  are having to make difficult choices in the wake of a global pandemic.

According to the Skimm,

“We’ve received hundreds of stories from our audience about their experience with paid family leave, or lack thereof. Too many parents are forced back to work much sooner than they or their families are ready for. We asked Skimm’rs where they stand.”

Companies have followed up with their “Paid Family Leave” policies using the Skimm’s hashtag “#ShowUsYourLeave” and here’s what they’ve had to say:

Following TikTok’s lead, Twitter is testing a new “quote tweet with reaction” feature that allows users to embed a copy of a tweet into a photo or video instead of simply replying to it with text.

Testing on iOS: when you tap the Retweet icon, choose “Quote Tweet with reaction” to create and customize your very own Tweet Take –– a reaction video (or photo) with the Tweet embedded. pic.twitter.com/1E30F8rKYh

According to The Verge:

“Twitter says that the feature is currently being tested on iOS. If you have access to the feature, the retweet menu will have a “Quote Tweet with reaction” button. Tapping it will take you to a screen where you can take a photo or video to put the tweet on top of, or choose one from your camera roll. One of Twitter’s product leads did a reaction quote tweet to the announcement, which lets us see how the reactions will show up to users.”

Do you think this new feature is going to take off on Twitter?

Virtual events are increasing in popularity since the onset of the pandemic. As a response, LinkedIn has started to develop an events platform and will begin with audio-only events, similar to those on Clubhouse.

In an article from Tech Crunch:

“When it launches later this month, the new events platform will include tools to run interactive content end-to-end, with no need to use any other third-party software: hosts will be able to record and run the event straight from LinkedIn, and it will feature tools for online attendees and hosts to speak to each other in live conversations and to moderate discussions; and for attendees to communicate to each other both during and after events take place. LinkedIn will also, naturally, list events and help get the word out about them across its platform.”

As LinkedIn continues to look for more ways to encourage users to spend more time on its platform, we can expect more event features to roll out. Stay tuned!

We lost another Hollywood great this week. Bob Saget, a comedian and beloved television father, has left behind a legacy of kindness, connection, and laughs. His friends and family have been sharing lovely and heartfelt tributes on social media over the past several days, painting a wonderful picture of the “Full House” star.

Before YouTube, Instagram, TikTok, and other social media, we turned to Bob Saget and America’s Funniest Home Videos for our weekly digital laughs.