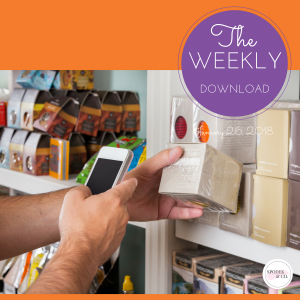 Let’s recap on what’s hot this week – we’re chatting about influencer marketing, Edelman’s 2018 Trust Barometer, Amazon’s first-ever checkoutless store, Crock-Pot’s defense after that This Is Us episode, and of course, Friday Fun.

Love it or hate it, influencer marketing is everywhere. It’s a marketing strategy that’s proven successful for many brands as a means to ensure a product or service is served up directly to a specific target audience. It also helps to establish brand trust.

But there are also drawbacks to partnering with influencers. Questions have been raised with regard to just how authentic an influencer’s following is given the ability to pay for followers. Brands are advised to pay close attention to influencer engagement, not just the number of one’s audience.

The prediction is that regardless of its drawbacks, influencer marketing will continue to grow. Advertising Standards Canada (ASC) says influencer marketing is still a gray area with respect to disclosure around paid-for posts. At Spodek & Co., we only work with influencers who agree to disclose when they have any type of material relationship with brand. In the end, it’s up to the consumer to do their own research.

The 2018 Edelman Trust Barometer is released

This week, Edelman unveiled its 2018 Trust Barometer – an annual global trust survey that measures attitudes about trust in business, government, NGOs and the media. The results are disappointing, but maybe not that surprising given the year we’ve had.

So, what’s the blame for the lack of trust in media in 2018? According to the research, fake news certainly didn’t help, nor did the staggering lack of faith in US government.
Some other interesting findings:

Want to read Edelman’s report in full? Check it out here.

Amazon’s first-ever checkoutless store opened this week in Seattle – that’s right, no cashiers, no exchange of money, no hassle.

So how does it work?

It’s all about the Amazon Go app. Simply scan your app at one of the entrance turnstiles, grab your items, and the app instantly rings up your total. The future is here, folks.

This Is Us reminds fans that Crock-Pots aren’t evil

Did you catch This Is Us this week? Without revealing anything too spoiler-y, the show dropped some big news and one of your favourite cooking tools played a part. Following the reveal, the show’s creator took to Twitter to remind people that Crock-Pot is not the enemy:

Taking a moment to remind everyone that it was a 20 year old fictional crockpot with an already funky switch? Let's not just lump all those lovely hardworking crockpots together. #ThisIsUs

Though the tool in the episode was clearly labelled as a generic slow cooker, Crock-Pot stood in solidarity with fans and assured them that their cookers are in fact, safe.

Burger King’s Whopper Neutrality
Burger King’s newest viral video explains the consequences of the repeal of Net Neutrality by putting it in terms anyone can understand: a Whopper sandwich.